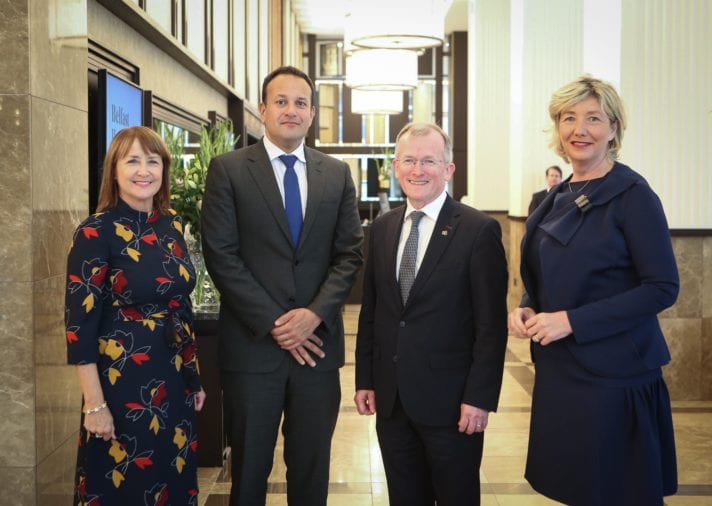 The two Chambers arranged the meeting of their senior representatives to discuss the implications of Brexit for both economies. Over a dozen business leaders from the two Chambers were joined at the private meeting by the Taoiseach.

Ann McGregor, Chief Executive of Northern Ireland Chamber of Commerce and Industry, said: “Businesses in Northern Ireland are rightly concerned about the future of north south relationships including all-island trade, integration of our labour markets, the all-island energy market and the damaging impact a no-deal exit could have on export sales.

“A messy and disorderly Brexit on 31 October would cause widespread damage to businesses and communities across the country. The impact on Northern Ireland in particular was highlighted in a recent report from the Department for the Economy, which stated that a no-deal exit will have ‘immediate and severe’ consequences, putting 40,000 jobs at risk. Most businesses and neither government is adequately prepared for a no-deal exit, which must not be allowed to happen by default.”

Dublin Chamber CEO Mary Rose Burke said: “Regardless of Brexit, the business communities North and South of the border are fully committed to closer economic cooperation across the island of Ireland, and to furthering the high level of integration that already exists. The free movement of goods across the border has been part of the economic architecture of this island for generations. Cross border trade has been on an upward trajectory for decades now, with total trade standing at €7 billion as of 2017. The business communities on both sides of the border will work hard to maintain this positive momentum in the face of the challenges ahead.”

“We and our business colleagues in Northern Ireland are at one on the importance of maintaining existing cross border trading arrangements. For over half (51%) of Irish exporters, Northern Ireland is the destination for more than 50% of their exports, and Northern Ireland accounts for over 10% of total Irish exports to the UK. Given that Northern Ireland makes up less than 3% of the UK population, this demonstrates how intertwined the two economies are. The North-South business relationship is one that we deeply value and must work to protect.”

“From a Dublin perspective, almost a third of businesses (32%) report that they would be adversely impacted by the loss of current trade arrangements with Northern Ireland. Indeed, one in ten (9%) of our own Chamber members report that they do more business with Northern Ireland than with any other region, including the domestic market in the Republic. So far, however, a lack of political clarity has been the main barrier preventing businesses from preparing adequately for Brexit. The value of the cross border goods trade alone has grown by over 50% since the Good Friday Agreement was signed, underlining the importance of political stability to the business environment North and South.”

The two Chambers formed a joint delegation to Washington D.C. in March of this year as a show of business commitment to the Good Friday Agreement and to affirm that the island of Ireland is open for business, organised to coincide with the St Patrick’s Day celebrations.