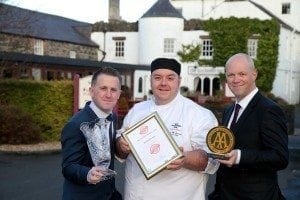 The Bushmills Inn is celebrating unprecedented success within the hospitality and tourism industry. The charming Causeway Coast hotel has won three separate awards for its outstanding hospitality, fine food and promotion of golf tourism.

It is only the second time in some 22 years that the AA Hotel of the Year award has been awarded to a hotel in Northern Ireland.  Introduced in 1992 and dubbed the ‘Oscars’ of the hospitality industry, the AA Hotel of the Year is the AA’s ultimate accolade for hotels in the UK and is awarded to hotels that are recognised as being outstanding examples in their particular market.  The Bushmills Inn fought off illustrious competition to take the title of Best Hotel.  Judges noted “the true spirit of Ulster hospitality” on offer at The Bushmills Inn, combined with the “friendly local staff and a myriad of thick walls, oak beams, real turf fires, a gas lit bar and lots of nooks and crannies” that make it a special refuge for guests.

The prestigious accolades are testament to the hotel’s position as one of Ireland’s and the UK’s most loved hotels which fuses traditional charm and bags of boutique luxury to deliver the best in hospitality in an area of outstanding natural beauty in Northern Ireland.

“I’m proud and honoured that The Bushmills Inn has been recognised by esteemed industry professionals, not just for one, but for three coveted titles that pay tribute to the breadth of service we offer at the hotel”, said Alan Walls, General Manager at The Bushmills Inn. “We’re lucky to be situated in one of the most beautiful corners of the world, surrounded by world class golf courses, and we make it our job to ensure that guests experience top-class facilities that show the best of Northern Ireland, from our welcome to beautiful locally sourced food.

Alan added: “None of our success could be possible of course without the enormous contribution made by the whole team at The Bushmills Inn who work passionately day after day to deliver excellent service.”