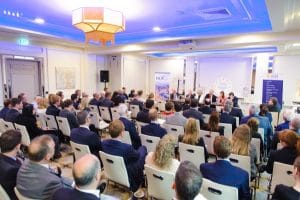 Stay in the EU – was the overwhelming view of some of Northern Ireland’s most prominent businesses at this morning’s Brexit Seminar held by ASM Chartered Accountants, in partnership with Belfast Chamber of Trade and Commerce.

Over 70 people attended the ASM Brexit debate from a range of industries including retail, hospitality, professional services, sports and services, who  were keen to get a better understanding of the issues to help shape their vote decision.

The majority of the panel guests were in favour of staying in the EU, and only three of the  70 attendees indicating they wanted the UK to leave Europe.

Speaking at the event, Michael McAllister, Director, ASM Chartered Accountants said: “Today was an opportunity for business people to hear the opinions of some of our leading business people on issues likely to effect Northern Ireland if we leave the EU.

“Brexit is a hot topic, and today we have found an overwhelming majority of our audience was against a leave vote and our guests have told us that the views expressed have only further cemented their vote for staying in the EU.”

Bill Wolsey, owner of Beannchor Group which owns The Merchant Hotel and the  Little Wing pizzerias business said today that he feels that Brexit would be ‘economic suicide’. He said that the argument to stay was totally compelling and that Northern Ireland and the rest of the United Kingdom do not need any further financial risk – he said, “we have just spent six years coming out of a financial mess, why would we voluntarily re-enter another one.”

Paul McMahon, Centre Director at Castle Court felt that it was important to stay in the EU as the retail sector, in particular, relies on labour from migrant countries.

He said: “Northern Ireland relies heavily on staff from European  countries – from the highly skilled in roles such as medicine to some of the lower skilled roles that we might see in retail, catering,  hospitality or other service providers. Today’s business relies on the free movement of labour within the EU. A Brexit could harm this which could have a long term negative impact on businesses and the public sector.”

Kevin McNamee, Denroy Plastics, continued to say that with 8,700 cross-border workers coming from the Republic of Ireland to the North to work daily – he posed the question – “what are the potential problems for these individuals and their employers if Northern Ireland is no longer part of the EU.”

Angela McGowan, Chief Economist at Danske Bank said whilst the bank remained neutral on the vote, if the UK was to leave the EU there could be grave economic consequences.  As HM Treasury’s central forecasts have shown us, a Brexit would lower tax receipts and leave the UK balance sheet with an annual black hole amounting to  £36 billion”.

The next ASM Brexit debates will take place in early June in the following locations:

Admission to the seminars is free and open to anyone with an interest in taking part or listening to the debate.