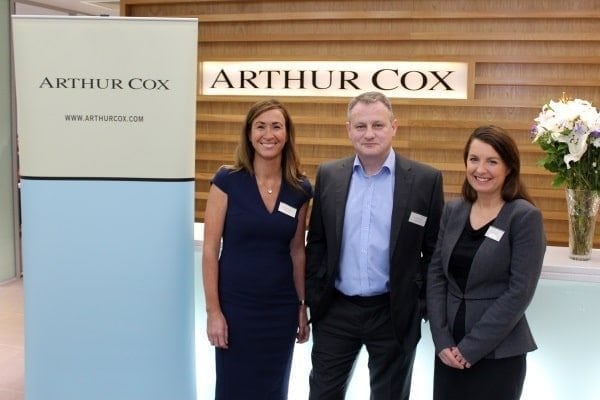 Arthur Cox has hosted a major, multi-session seminar in conjunction with Legal-Island to provide HR directors from some of Northern Ireland’s largest businesses with advice on the impacts of Brexit on local employment and immigration laws.

Emma-Jane Flannery, Employment Law Partner at the firm’s Belfast practice, was the keynote speaker at Thursday’s events, which were attended by over 80 HR professionals from companies including Allstate and Caterpillar, as well as Danske Bank and Bank of Ireland. The seminar was over-subscribed and an extra afternoon session was held to meet demand.

Speaking at the seminar, Emma-Jane strongly urged local employers with large contingents of EU national workers to carry out a workforce audit as soon as possible to ensure they are fully prepared for any possible post-Brexit changes affecting EU workers.

Emma-Jane also warned of the potential for wide-ranging ramifications for employers with cross-border operations.

Delegates heard that there will be no immediate changes to employment legislation following the UK’s vote to leave the EU last month, and that it could be at least another two years before any Brexit-inspired amendments can be imposed, as the UK Government is unlikely to trigger Article 50 (the EU ‘exit’ clause) until late 2016 or early 2017.

Emma-Jane told the capacity audiences: “While a lot of our employment law is likely to be cushioned from Brexit shocks, there is significant potential for employers with a large number of EU national workers to be impacted – and they must fully prepare for that.

“Depending on the structure of the post-Brexit trade arrangement agreed by the UK, EU national workers could face restrictions on working in Northern Ireland if they haven’t lived in the UK for the required five years in order to obtain permanent residency certification.

“It’s important that such employers carry out an audit of their workforce to ascertain how many could be vulnerable to post-Brexit restrictions and potentially become illegal workers. At the same time, employers should also communicate regularly with their employees to assure them that there will be no changes in the short-term, as this will help maintain staff morale.

“Such an audit would help employers identify skills gaps which are likely to emerge and gauge whether the local jobs market can meet any shortfall. HR managers should also monitor any recruitment or redundancy campaigns to ensure that EU nationals are not being discriminated against as employers look ahead to the UK’s exit from the EU.”

On the potential effects of Brexit on Northern Ireland-Republic of Ireland operations, Emma-Jane added: “At this stage, it is not clear whether a physical border between Northern Ireland and the Republic of Ireland will return. We can’t simply forget about all the other nations in the EU, many of whom will no doubt have strong feelings about whether the UK and Ireland can remain a common travel area post-Brexit.

“Another key consideration must be whether registration and immigration controls will be imposed for existing non-national/non-EU workers already in the country. Until the UK’s new trade arrangement is finalised, it’s difficult to predict how both countries will interact economically in the future.

“We are assisting indigenous and multi-nationals alike in navigating these uncertain times.”

Commenting on the event, Scott Alexander, Head of Learning and Development at Legal-Island, said: “There has been a lot of commentary about the potential impact of Brexit on employment law since the EU vote. These seminars provided the perfect opportunity, a month on, for delegates to receive considered, expert advice from Arthur Cox and we thank Emma-Jane for her professional insights.

“The messages are a perfect example of how Brexit is likely to have an impact across a wide range of laws and, from the significant interaction between the delegates and Emma-Jane, it was clear that companies are very much planning for the changes.”

Arthur Cox is ranked as one of the leading law firms in Northern Ireland and the Republic of Ireland by both Chambers and Legal 500 and currently advises Government, leading corporate clients and the SME sector. The firm employs over 90 people in Belfast with additional offices in Dublin, London, New York and Silicon Valley.