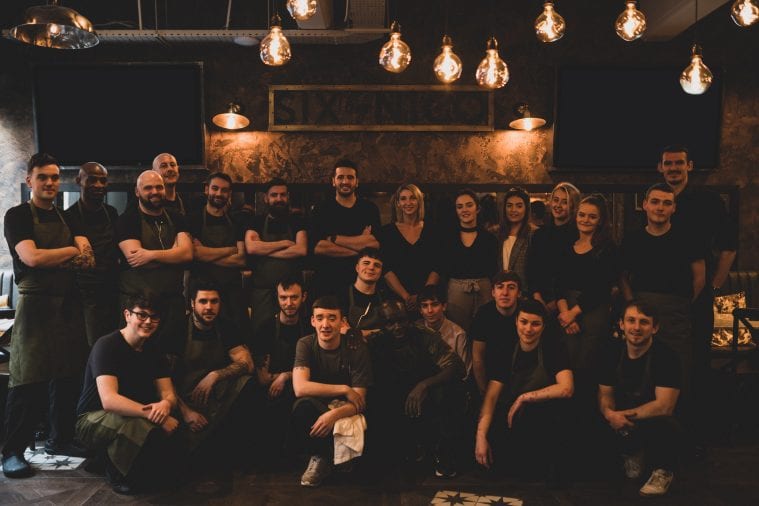 The much anticipated ‘Six by Nico’ Belfast restaurant opened its doors this week in the city’s Cathedral Quarter.

Acclaimed Scottish-Italian chef, Nico Simeone, has introduced his Glasgow and Edinburgh dining concept ‘Six by Nico’ to Belfast, taking the conceptual restaurant idea out of Scotland for the first time.

Chef Nico and his team will re-invent the wheel every six weeks, serving a brand new six-course tasting menu, each one themed around a different place, memory or idea. Drawing inspiration from both home and abroad, the thought-provoking menus will combine different ingredients, flavours, and dishes, to create a brand-new dining experience. Chef Nico Simeone said, “I have been working with my creative team over the past number of months to bring Six by Nico to Belfast and my vision has finally become a reality. I always wanted my next venture outside Scotland to be in Belfast as I love the city and I am delighted to be open. Six by Nico is a totally different dining experience and I hope that people will leave having had an unforgettable meal.”

From creative menu concepts to outstanding food and service, the venue is set to be an immediate hit with the people of Belfast.  Over 5,000 reservations have already been made in advance of doors opening this week.

Located on Waring Street, the 80-cover restaurant will showcase its six-course tasting menu, priced at £28 per person, and with wine pairing priced at an additional £25.

‘The Chippie’ menu will kick-start the series of evolving concepts – which provides a nostalgic nod to the traditional fish and chip shop. Items on the menu are creatively re-imagined with an extra contemporary twist, giving people a fun and unexpected culinary experience. The menu includes; chips & cheese, scampi, steak pie, fish supper, smoked sausage and deep-fried mars bar. Vegetarian alternatives are also available. Born in Glasgow, to Italian parents, Nico was raised in a family of Mediterranean foodies. His earliest memories are of his mother’s Italian cooking, helping her in the kitchen and large family meals around the table.

His colourful career has included stints at Michelin starred Number One at Balmoral, where he worked with Craig Candle and was awarded Young Scottish Seafood Chef of the Year award [aged 20],and working as part of the brilliantly talented team at Brian Maule’s acclaimed, Chardon d’Or.

Nico’s business goals and work ethic aimed towards challenging his skills as both a chef and and restaurant operator, are what have led him and his eager team to embark on expanding the ‘Six by Nico’ restaurant concepts.

Awards won by ‘Six by Nico