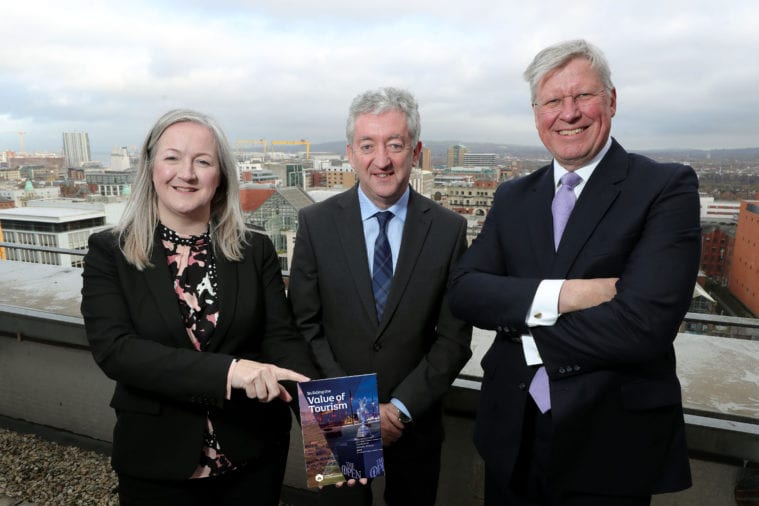 The staging of the best attended Open outside of St Andrews and the launch of a new destination brand are just some of the highlights detailed in Tourism NI’s Annual Review.

Commenting on the Review, Tourism NI Chief Executive, John McGrillen said: “It has been an outstanding year for tourism. The theme of the Annual Review is ‘Building the Value of Tourism’ and that’s exactly what we’ve sought to do, by collaborating and working directly with local businesses to get them selling on a global scale and consolidating Northern Ireland’s position as a must-see visitor destination.

“We’ve been able to do this against a very challenging economic and political backdrop and in an international marketplace that is crowded with other destinations, all competing for visitors.

“Latest figures published in 2019 show that tourism contributes £2.7 million per day to the local economy, making tourism a key driver of our economic growth. Growth was evident right across the tourism industry, and with the staging of The 148th Open, it was distinctly visible in our golfing product.  Progress was also evident in areas such as the Causeway Coast and Giant’s Causeway, Titanic Belfast, Belfast in general and screen tourism, especially in relation to Game of Thrones experiences and attractions.

“The first half of the year was firmly focused on building on our growing golf tourism economy and delivering a record-breaking 148th Open which quickly became the fastest-selling event in the Championship’s history, and injected an incredible £106m into the economy.”

Martin Slumbers, Chief Executive The R&A added; “The Open showcased the very best of Northern Ireland to millions of people as a world class host of major sporting events and a leading tourism destination. Much of the Championship’s success was down to the tremendous support we received throughout the years of planning from the local agencies in Northern Ireland and we are grateful for their help in staging the biggest sporting event the country has ever seen.”

John continued:  “The Open couldn’t have gone any better but it couldn’t have happened without the teamwork and collaboration of a great many people. We are very grateful for the input and effort of each and every volunteer, staff member and stakeholder. Because of their contributions the world talked about the giant welcome we gave, Northern Irish golf, Royal Portrush, the Causeway Coast and Northern Ireland like never before.

“It is this giant welcome that is at the heart of our new destination brand for Northern Ireland which we launched at World Travel Market in London in November. Northern Ireland – Embrace a Giant Spirit is an opportunity and an invitation to create economic uplift for everyone involved in tourism, in all parts of Northern Ireland. It will build on the strengths and successes of the last decade to give authentic experiences provided by businesses large and small that will leave our visitors with unforgettable memories.

“The Open and the destination brand were perhaps our biggest achievements of the year but I’m delighted to say we’ve had other key successes including our launch of a three year food and drink partnership initiative Taste the Island. This highlights the quality of our local produce on an international stage and builds on the highly successful Year of Food and Drink 2016 as well as the ‘Best Food Destination’ accolade achieved at the International Travel and Tourism awards.

“Business and trade tourism is a major driver of growth in visitor spend and the past year has seen us host a number of high-profile tour operator events as well as focus our attention on highlighting Belfast as a leading conference destination.

“One of the biggest success stories of our tourism offering continues to be Game of Thrones, with the latest figures estimating one in six international leisure visitors choose to visit Northern Ireland because of the hit TV show and spend in excess of £50m in the local economy.

“We continued to build on this offering over the past year by attracting the Game of Thrones touring exhibition to Titanic Belfast, for its only stop in the UK and Ireland. Plans are in place for the first of the legacy projects, with a formal studio tour of Linen Mill Studios scheduled to open in late 2020, giving more people more reasons to extend their stay in Northern Ireland.”

John concluded: “Early indications for 2019 suggest a strong start for visitor figures and while Brexit represents a significant and ongoing issue, we are planning ahead for the next decade of growth and achieving our objective of doubling the value of tourism to £2 billion by 2030.”