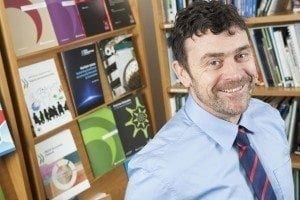 The latest quarterly Business Monitor (January – March 2015) released today by InterTradeIreland reflects a positive but cautious start to the year for businesses across the island. Almost nine in ten firms are either growing or stable, with the number of companies expanding rising from 37 per cent in the final quarter of last year to 43 per cent in Q1 2015.

Businesses in Ireland continue to perform better than their counterparts in Northern Ireland with 47 per cent growing in the south compared to 34 per cent in NI. Seven per cent more southern firms also reported an increase in sales in Q1 than those in NI.

Most sectors experienced stability rather than growth in the first quarter of 2015. Encouragingly though, after a particularly challenging quarter at the end of 2014, the construction sector bucked this trend and picked up significantly with 59 per cent of firms in the industry expanding at the start of 2015. Leisure, hotels and catering businesses struggled most in Q1 with only 33 per cent experiencing growth and more than one in five (22%) businesses in the sector contracting or surviving at all costs.

Sales performance has declined for the second quarter in a row with businesses reporting an increase dropping from 39 per cent in Q4 2014 to 32 per cent in Q1.

Aidan Gough, Strategy and Policy Director at InterTradeIreland, said: “Results in this Business Monitor reinforce the generally positive pictures that have been apparent since the middle of 2013 with 88% of firms saying they are either stable or growing. Of course, the fact that 45% are stable with just 43% growing, explains why the much-vaunted ‘feel good’ factor seems hidden.

“Although a third of firms are more cautious about investment than they were a year ago, it is encouraging to note that more than two thirds of firms plan to invest in their businesses over the next year, particularly in the areas of IT and Marketing with one in five companies planning to increase employment.”

Results from Q1’s report also highlighted the performance of those involved in cross-border trade and found that these businesses were significantly more likely to grow and twice as likely to be taking on staff over the next 12 months.

“This again shows the importance of cross-border trade and export as a long-term strategy for business and overall economic growth,” Aidan added. “Sales performance of exporters continued to outstrip non-exporters and remained very strong. However, it appears in the short-term, that the current environment for those selling across the border has been more challenging. This quarter, the report showed that there were more firms experiencing a decrease in cross-border sales in the last 12 months than those reporting an increase.

“The volatility and fluctuation of the exchange rate may be having a temporary effect on cross-border trade. While current exchange rates are a significant issue for only a small number of firms, this is an issue which has been growing in importance, rising from two per cent at the start of 2014 to six per cent this quarter.”

Aidan continued: “Despite short-term challenges, markets across the border should not be overlooked. It was worrying to find that more than half (56 per cent) of businesses surveyed don’t export, despite having suitable products and services. The reasons they gave included ‘being too far away’ and a ‘lack of management time and resource’ but we would urge firms to consider investigating their options. The first step would be to contact business advisory bodies, such as InterTradeIreland, where there are a range of programmes which can support firms in their exporting journey.”

Figures also indicated that the cost of business overheads, including wages, is now the leading challenge for firms. The significance of energy costs has dropped considerably since the start of last year, falling from 30 per cent of firms recognising them as a key challenge in Q1 2014 to eight per cent at the start of this year, perhaps reflecting the reduction in fuel prices and the importance of transport costs to many sectors.

InterTradeIreland’s quarterly Business Monitor survey is the largest and most comprehensive business survey on the island and is based on the views of more than 750 business managers across Northern Ireland and Ireland.

It differs from other surveys in that it is seen to be the ‘voice of local businesses’ feeding directly from telephone interviews conducted with a robust sample of firms of all sizes across a range of sectors to track all-island economic indicators such as sales, employment, business outlook and other specific topical research areas on a quarter by quarter basis.