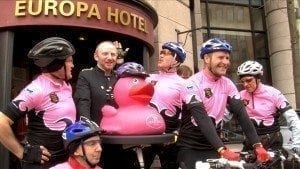 Hastings Hotels has got on its bike to help give people a taste of what the world’s elite cyclists can look forward to when the Giro d’Italia takes place in Northern Ireland next month.

Three of the hotels owned by the group are on the route of the Giro d’Italia and to celebrate, Hastings Hotels took to the road with the Yellow Arrows cycling group from Larne to film part of the route that around 200 of the world’s best cyclists will be following.

The Stormont Hotel, the Europa Hotel and Ballygally Castle will all be part of the action and Julie Hastings, Marketing Director of Hastings Hotels said she hopes the Cycle Where they Cycle, Stay where they Stay short film will help add to the excitement in advance of Northern Ireland’s biggest sporting event in 2014.

“We are thrilled that three of our hotels are dotted along the route of the Giro d’Italia. In fact some of our guests will only have to look outside of their windows to see the action.

“With this in mind, we partnered up with the Yellow Arrows cycling club from Larne and took to the road to put together an action packed video to showcase the route and the stunning scenery that the world will be able to see when the event takes place next month,” Julie continued.

The short film follows the group of cycling enthusiasts from the Stormont Hotel to Belfast City Centre past the Europa Hotel and along the Causeway Coastal Route to Ballygally Castle.