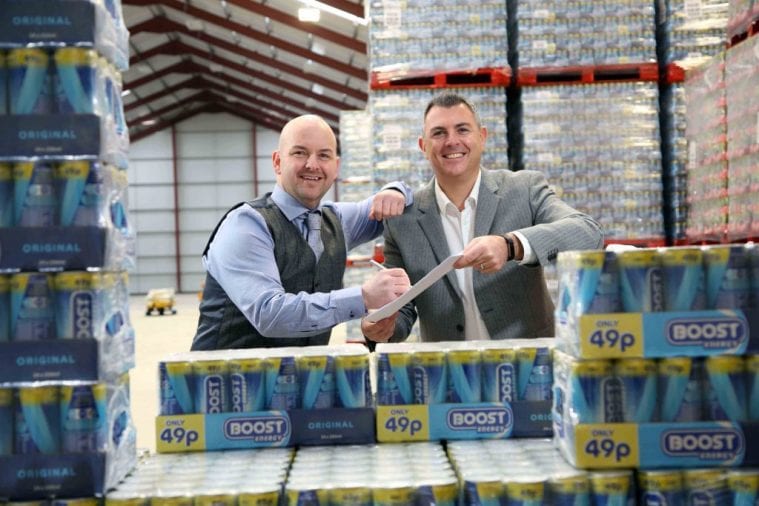 As distribution partner for Boost, which is currently celebrating its 15th birthday in Northern Ireland, HSMNI will provide warehousing, distribution, van sales and key account management across all the major symbol, cash & carry and delivered wholesalers within the NI convenience and food service sector.

Hardy Sales and Marketing will also support Boost with all marketing activities within the province, including trade and consumer marketing, and merchandising in wholesale and retail.

The contract will see a staggering 150 million cans and bottles of Boost, with a retail value of approximately £75 million, distributed from Hardy Sales and Marketing’s new warehouse facility in Castledawson during the five year period.

“We are delighted to have secured an exclusive five year contract with Boost in Northern Ireland,” said HSMNI Managing Director Gareth Hardy.  “It’s fantastic news not just for us but for wholesalers, retailers and consumers who all love the brand.

“We’ve been working with the company since it first arrived in Northern Ireland 15 years ago, and the success it has enjoyed here since then has been nothing short of phenomenal.  This new contract reinforces Boost’s commitment to the Northern Ireland region and enables us to invest locally in the brand.  In fact we’ve just moved into a new 30,000sqft warehouse with a full warehouse management system which will allow us to improve on our already comprehensive and reliable route to market.

“We have a long term strategy for Northern Ireland which involves working closely with our wholesale and retail partners to ensure we keep the product moving off shelf,” he added.

Boost Energy founder and Managing Director Simon Gray said:  “It’s great to be in Northern Ireland today to sign a new five-year distribution agreement with Hardy Sales and Marketing, who have played a very important role in the growth of Boost here over the years.

“Northern Ireland is a massive market for us and the public has really taken Boost to their hearts – making us the number one soft drink in the independent retail sector here.  This is really important to us as we exclusively sell Boost in local independent retail stores and not the big supermarket chains – and Hardy Sales and Marketing has played a pivotal role in helping us do this.

“A phrase that you’ll be hearing a lot from us going forward is ‘We Love Local’ which underpins our strategy of supporting the local home-grown independent retailers who have helped make Boost the huge success in Northern Ireland that it is today.  A lot of that success has to be attributed to the Hardy family, their local connections, and the hard work, endeavour and passion that they’ve shown for the brand over the years in getting it onto the retailers’ shelves.

“This five year agreement gives both parties security of supply, helps manage risk and allows both companies to invest for the future,” added Simon.

Gareth Hardy acknowledges the role of his father in spotting Boost’s potential 15 years ago.

“Right from the beginning, my father Sean identified Boost as a product that would appeal to Northern Ireland consumers and he was 100 per cent right,” said Gareth.

“The Northern Ireland consumer is very loyal to brands they love and he knew that once we got the product on shelf, the NI public would really buy into it – as it ticks all the boxes in terms of quality, taste and value.

“It was hard work back in the early days with a lot of hours and a lot of miles covered, but the support of all our trade customers was crucial to building the brand to its current position as the number one selling soft drink in Northern Ireland,” he concluded.

Boost Energy was established in 2001 after founder (and MD) Simon Gray saw the opportunity to offer consumers a great quality energy drink at a fraction of the price of other brands at that time.  Two years later in 2003, Boost Energy was launched in Northern Ireland and now, 15 years later, is the province’s largest soft drink within the independent convenience channel.