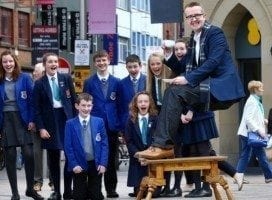 Proving that the impossible is actually possible, David attracted gasps from startled onlookers as he sat suspended in thin air – a feat that must be seen in person to be believed. The display was created by BT to mark the official launch of the 2016 BT Young Scientist & Technology Exhibition and today the company called on second level students across the island of Ireland to get involved. To enter, the individual or group must submit a one-page proposal outlining their project idea before the closing date of 29th September, 2015. Entries can be made in any one of four categories: technology, social and behavioural science, biological and ecological science or chemical, physical and mathematical science.

Commenting on the launch, David Meade said: “I am very excited to be involved in the BT Young Scientist & Technology Exhibition. As a former teacher myself, I understand the importance of encouraging young people to take what they’re learning in the classroom and use their imagination to turn it into a fantastic idea.

“It is so important that young people create their own journey and future path to success and this world class competition is a great way of helping them to really imagine the possibilities that could lie ahead – as I’ve demonstrated today, nothing is impossible if you put your mind to it!”.

Colm O’Neill, chief executive, BT Ireland, said, “As a major investor in Northern Ireland we depend on talent and skills to drive our economy and the BT Young Scientist & Technology Exhibition plays a key role in nurturing that future pool of talent.” He added, “People who have experienced the exhibition understand that it is about much more than science, it’s about imagining an idea and then bringing that idea to life through research and development. Every discovery ever made came from a single idea and we want all teachers and students involved in science, technology, engineering, maths or the social sciences to challenge themselves to make that next big discovery through the exhibition. I’m looking forward to seeing some great entries over the coming months.”

The BT Young Scientist &Technology Exhibition will take place from 6th – 9th January, 2016 at the RDS in Dublin. As well as the incentive of getting a project shortlisted and experiencing a week at the exhibition in Dublin, there are also over 120 teacher and pupil awards to be won, including cash prizes, international trips and the overall title of BT Young Scientist & Technologist(s) of the Year.

For more information on the exhibition and for details on how to enter, log onto www.btyoungscientist.com.