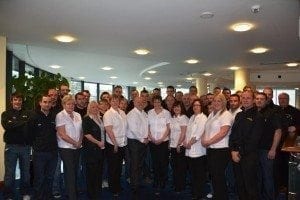 As Northern Ireland’s business sector claws its way out of the worst economic downturn in living memory, we should perhaps remember the old adage: ‘In adversity lies opportunity’. For that has been the experience of Solmatix Renewables, a locally based company that provides solar panels, solar water heating and wood pellet boilers to Northern Ireland, Ireland and the UK. Despite all the trends, the period 2008 to 2013 saw this local solar renewable energy company achieve quite remarkable growth.

“We started Solmatix back in 2008, working from outbuildings at my family farm in Dundrod,” explains company founder and managing director, Richard Bell. “We had a clear vision of where we wanted to take the solar renewables sector in Northern Ireland, but there were only three of us and in our first year, we managed a turnover of £3,000. We currently employ a staff of 45 local people and we’re looking at a turnover of around £5 million for this year, with a target of £8 million for 2014.”

All of which begs the question: how did Richard and his team achieve such substantial growth in the middle of a recession and in just five years?

“It’s a combination of factors”, says Richard. “Timing has worked to our advantage. The economic pinch meant that incomes got tighter, and with rising energy charges, business and domestic customers started to look at ways of cutting their costs. Solar energy is ideal in that respect because the savings from solar kick in straight away. Plus, we’ve always worked hard to secure all available grants for our customers. This means our systems are not only cost savers, but self-sustaining revenue generators.”

“At heart, we’re an engineering company that specialises in solar renewables. We’re driven by engineering excellence. My background includes times as technical director with RFD and mechanical engineer with Shorts Defence Division and you’ll find the same engineering prowess running through every level of Solmatix. And of course, we’re a bricks-and-mortar local company. Customers can see us, talk to us and know that we’re here to stay.”

The fact that Solmatix can install in a wide range of commercial, agriculture and domestic environments has also been to its advantage. Their first systems were solar panels for hot water, but within a few years, Solmatix had become pioneers of solar PV in Northern Ireland and the company now services major clients in the business, agricultural, domestic and volume housing sectors. Its customers include car dealers, hotels, dairy farms, poultry producers and concrete plants.

“Assuming your infrastructure is suitable, then going solar becomes a pragmatic business decision. Quite frankly, once when we show potential customers the figures in terms of savings, income and payback period, the decision to install is easily made.”

Richard also points out that their solar panels can be installed remarkably quickly, usually no more than two to three days, and there is no disruption to business. His team also resolve all grant applications so any potential hassle for the client is minimised. “We’re an approved installer for Moy Park’s suppliers, which I believe is testament to our rigorous quality standards.”

Richard sees massive opportunities for further growth in the commercial sector in Northern Ireland and he is currently working towards the development of the low energy social housing sector in Scotland. This push into the Scottish market has been rewarded by winning a contract to design supply the renewable equipment for a new zero-energy showhouse, commissioned by BRE the national energy body on the Ravenscraig site. This will form the basis of low energy social housing across Scotland.

According to Richard, “The future’s bright, the future’s solar. The costs of traditional carbon-based fuels are set to keep rising, whereas renewable technologies are improving dramatically in terms of energy efficiency and unit costs. We’re also looking beyond solar to other areas, such as biomass burners to heat homes and businesses. All they have to do is talk to us about the best solution for them.”