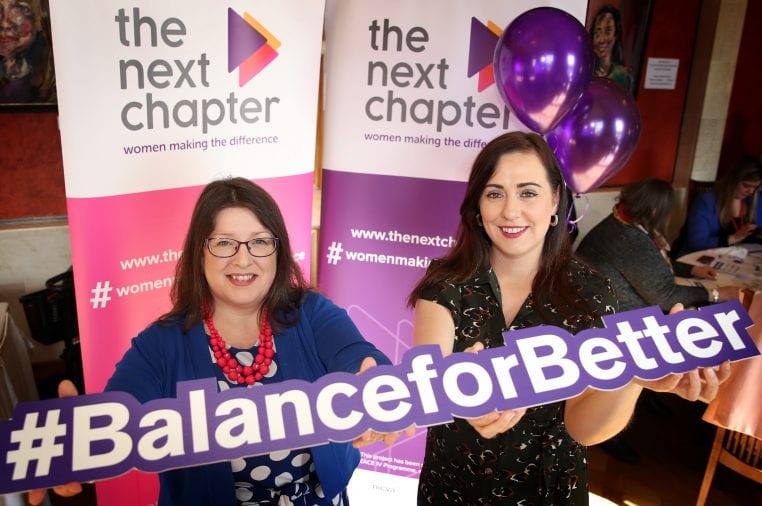 The first in a series of Peace & Reconciliation events organised by The Next Chapter, an EU PEACE IV funded project which targets women in Northern Ireland and the border regions of the Republic of Ireland to develop their ideas, build communities and support the transition out of conflict, took place today to mark International Women’s Day 2019.  The event at Parliament Buildings was based on the IWD 2019 global theme #BalanceforBetter and discussed the importance of women leading on the journey from conflict to community co-operation and delivering positive change on issues like good relations and gender equality.

Participants from Next Chapter Hubs in Foyle, Belfast, Lisburn & Castlereagh, Newry, Cavan, Louth, Monaghan, Newtownabbey, Enniskillen, Mid Ulster and Co Donegal joined together for the first time alongside members of the Northern Ireland Assembly Women’s Caucus to debate and discuss women’s issues in a post conflict society, including barriers to participation in community, public and political life. The second event is scheduled for the Dáil in June.

Powered by Politics Plus in conjunction with Northern Ireland Council for Voluntary Action (NICVA), Irish Rural Link the Next Chapter is funded through the European Union’s PEACE IV Programme, managed by the Special EU Programmes Body (SEUPB). Match-funding for the project has also been provided by the Department of Rural and Community Development in Ireland and the Executive Office in Northern Ireland.

Head of Programmes Joanne Jennings welcomed participants from the 10 Next Chapter hubs to Stormont: “The Next Chapter project has been designed to facilitate and support sustained and meaningful contact between women of all ages and backgrounds and encourage them to take the next step into community, politics and public life.

“Recent training in women’s roles in peace building, decision making in public and political life and communication, has increased competency and already given some participants the confidence and skills they needed to represent the communities where they live and work. This event heralds the beginning of an exciting series of conversations and debates, new alliances and networks, enabling change and the generation of new ideas,” she added.

Chair of the Northern Ireland Assembly Women’s Caucus Megan Fearon MLA said: “Today was a timely and necessary engagement among women from the Northern Ireland Assembly Women’s Caucus to listen to female voices from across civic society to mark International Women’s Day. There is a global initiative to tackle gender imbalance and under representation and we believe that the future success of peace-building relies on increasing the number of women in community, public and political life.”

Deputy Chair of the Women’s Caucus Kellie Armstrong MLA added: “This has been a fantastic event, engaging with Next Chapter women from across Northern Ireland and the border counties of the Republic of Ireland who are adopting a gender lens through which to view reconciliation and peace-building. Initiatives such as this are essential, we still have a long way to go and we all have a role to play.”