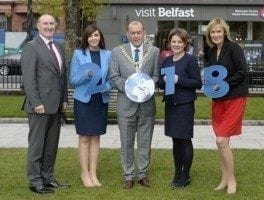 Ambitious new plans to drive continued tourism growth in Belfast and rapidly increase its value and return to the local economy over the next three years have been revealed by Visit Belfast.

Unveiling its strategy and plans for 2015-18, as part of its key strategic focus, Visit Belfast was committed to delivering rapid growth in the number of leisure and business visitors staying overnight, and to lever a greater uplift in revenues generated by tourism for the local economy.

Showcasing the successes and achievements made in 2014, Visit Belfast said it was now seeking to more than double the number of leisure and business overnight stays from 290,000 to 690,000 within three years, driven by campaigns that will target younger travellers as well as ‘culturally curious’ visitors attracted by the city’s heritage and uniqueness.

Visit Belfast is also committed to adding to the city’s fast-growing share of the international conference and events market after setting ambitious new targets to drive inbound business and conference leads which will be enhanced next year by the opening of the Belfast Waterfront extension, which bolsters the opportunities available in both size and scale of event that Belfast can now compete for.

By 2018, Visit Belfast said its renewed focus on driving growth in leisure, business and cruise visitors, by handling two million enquiries over a three-year period, and by meeting all the challenging targets set, it will deliver a record return of £370 million to the local economy.

“Belfast City Council is only too aware of the importance of tourism to the city – it supports the economy directly and indirectly.  From supporting 17,000 jobs within the tourism economy, to enabling investment in infrastructure, transport services and leisure and cultural facilities, a growing tourism industry ultimately benefit us all.

“To build on the achievements made and the momentum we have achieved together, the priority now is to continue our focus and energy and raise Belfast’s tourism economy to a higher level. Working together, we have made great strides in both attracting and delivering visitors to Belfast and the outlook remains bright.”

Belfast’s Integrated Tourism Strategy 2015-20* has already earmarked a planned doubling in tourism revenue for the city by 2020 to £870 million from £438 million in 2013. Visit Belfast, working alongside its funders, partners, and private sector members, said its robust plans would play a vital role in delivering these ambitious city targets.

Visit Belfast Chief Executive, Gerry Lennon, said: “Last year, we saw record levels of hotel occupancy in Belfast, which is testament to the partnerships in place to promote the city both in the UK, Ireland and overseas, and this clearly validates that Belfast has become one of the world’s leading tourist destinations.

“As an organisation, we are pleased to have delivered on our commitments for 2014, meeting and exceeding our own challenging targets and ensuring this exciting, vibrant and forward-looking city continues to achieve its tourism potential.

“International tourism is a growth industry but the global marketplace is getting tougher as cities and countries emerge.  Belfast is outperforming others in terms of growth and we can continue to do that with the right focus, priorities, investment and activity.

“Visit Belfast, its funders, partners, stakeholders and members, look forward to delivering that continued success, to rapidly increasing the impact of tourism on the local economy and to ensuring we play a significant part in the goal to create a £1 billion tourism industry in Northern Ireland by 2020.”

Last month, Belfast was placed yet again in the Top 10 UK destinations in a survey carried out by the online travel forum, TripAdvisor, describing the city as ‘a cosmopolitan destination’ which has ‘life pulsing through it’ and an ideal place for an ‘energising getaway’.

Jorge Lopes, Country Director, Diageo Northern Ireland, said: “At Diageo Northern Ireland, we are committed to assisting in the development of Belfast’s tourism economy and its hospitality offering, supporting the tremendous efforts which are being made to cement the city’s international reputation as a modern, welcoming and dynamic destination. We’re delighted to have been involved in Belfast’s tourism success and to be playing a pivotal role in the city’s future.”