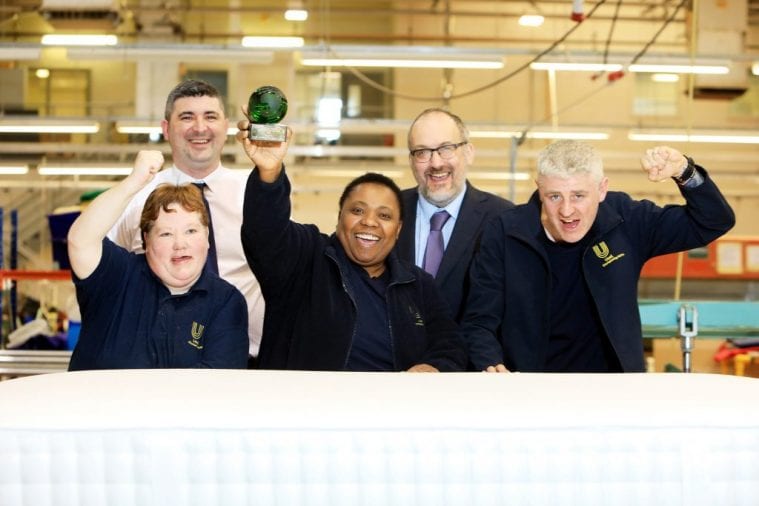 USEL, a Northern Ireland social enterprise that creates jobs for people with disabilities, has been recognised as one of the world’s leading green businesses.

Usel (Ulster Supported Employment Limited) won the Green Apple World Environmental Award for Environmental Best Practice at a ceremony in Dubai, beating off the challenge of more than 500 other international organisations.

Bill Atkinson, CEO of Usel said: “We are delighted to have won a Green Apple Award, one of the world’s most prestigious environmental awards. Previous winners include Canon, Vauxhall and George at Asda so for a social enterprise from Northern Ireland to be recognised on this world platform is a special honour.”

Usel’s many projects include a thriving recycling business saving thousands of mattresses from ending up in landfill and creating new jobs for people with disabilities and health-related conditions.

The company disassembles the mattresses into components such as foam, polyester, ticking and steel which are sent on for further processing and reused for things like carpet underlay, equestrian surfacing, acoustic dampening for cars and the steel springs are shredded so they can be melted down for re-use.

Mr Atkinson added: “Usel are fully committed to environmental best practice through the delivery of a Circular Economy model across Northern Ireland in partnership with local authorities as a model for job creation for people with disabilities and health conditions”.

The company’s winning paper will be published in The Green Book, the leading international work of reference on environmental best practice, so that others around the world can follow their example and learn from their achievement.

The Green Apple awards were established in 1994 to find the world’s greenest countries, companies and communities.

They are organised by The Green Organisation, an international, independent, non-political, non-profit environment group dedicated to recognising, rewarding and promoting environmental best practice around the world.