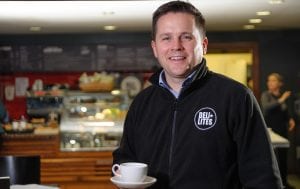 Two deliciously unique creations from Northern Ireland’s leading food-to-go business have been given the golden stamp of approval at the annual Great Taste Awards, where Warrenpoint-based DELI-LITES Ireland was accredited with three of the prestigious stars.

The stellar accolades were presented to DELI-LITES for two of its flavoursome Bespoké Bowls, which are filled with fresh salad, protein and fibre. The Asian Bespoké Bowl, which won two stars, was described as a ‘visual feast’, while the Italian Bespoké Bowl received one star for its colourful and fresh mix of healthy ingredients.

Summing up the tasty pots of internationally-inspired fare, the judges captured the sentiment of DELI-LITES Bespoké bowl range in their comments which described them as “Clean food, well prepared, balanced and full of zingy flavours. We would like to eat this most days for lunch.”

Speaking about the high-profile acknowledgments, Managing Director at DELI-LITES Ireland, Brian Reid (pictured), said:  “Customers are no longer satisfied with a basic selection of sandwiches.

“Our Bespoké Bowls reflect the changing customer demand for healthy, filling and delicious food-to-go which is bursting with flavour and provides a satisfying meal. We’re delighted with the recognition from these latest Great Taste Awards and the positive feedback from the judges.

“As this accreditation highlights, our chef-led team is passionate about innovative food development and continues to break the mould by introducing unique flavour combinations with the best quality ingredients, and a global inspired taste.”

Judged by over 500 of the most demanding palates, belonging to food critics, chefs, cooks, restaurateurs and producers, as well as a whole host of food writers and journalists, Great Taste is widely acknowledged as the most respected food accreditation scheme for artisan and speciality food producers. As well as a badge of honour, the unmistakeable black and gold Great Taste label is a signpost to a wonderful tasting product, which has been discovered through hours and hours of blind-tasting by hundreds of judges.

DELI-LITES Ireland was founded by Brian and Jackie Reid in 1998 and is based outside Warrenpoint, employing over 300 people. The business produces around 15m hand-made sandwiches, wraps and salads annually and distributes across Ireland.