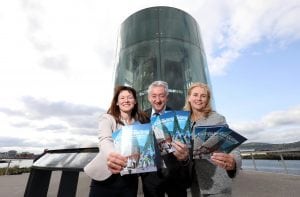 Commenting on the Review, Tourism NI Chief Executive, John McGrillen said “It has been a really strong year for tourism. Collaboration and working directly with local businesses to get them selling on a global scale has delivered real impact.

“In 2017-2018, tourism contributed some £2.5 million per day to the local economy, making tourism a key driver of our economic growth. Tourism creates jobs right across Northern Ireland and helps our economy prosper all year round. While we are enjoying the success of a record year, we are ambitious to grow and develop tourism even more. In order to compete on a global scale we must continue to develop new and unique visitor attractions.”

“Tourism NI has worked hard locally with the tourism industry and on international selling platforms to develop and market world-class visitor attractions, accommodation, activities and hospitality that positions Northern Ireland as a must-see destination. That work is paying off in many ways, but Lonely Planet’s naming of Belfast and the Causeway Coastal Route as the number one region in the world to visit in 2018 was a particularly welcome start to 2018.

“One of the stand-out events of 2017/18 was Meet the Buyer, which is an intrinsic part of our sales efforts and leads to millions of pounds of business for local companies. The event provides the opportunity for hundreds of international tour operators from around the world to meet with local businesses who take up the opportunity to showcase their products to a global audience in order to secure future business. The event has improved year on year as its reach and reputation extends worldwide, and this year’s event was the biggest yet. More than 5000 sales appointments took place with industry representatives meeting over 200 international operators from 22 markets including China, India, New Zealand and Australia, who had the opportunity to see first-hand what Northern Ireland has to offer visitors.

“Tourism NI was key to securing the Hosts Global Forum event held in Belfast earlier this year. This was the first time that the event has been held outside the US. The event brought together 200 of the world’s leading destination management companies and meetings and incentive buyers who account for some $2billion business tourism spend. Delegates were treated to a world-class welcome, experience and hospitality and we are already receiving enquiries about Belfast as a conference venue as a direct result.

“Local tourism businesses are benefiting from growing visitor numbers with some welcoming record visitor numbers through their doors. The 2017-2018 year also brought an upward trend and significant level of investment by the hotel and wider accommodation industry. In particular, 2017 was a record year for hotel demand in terms of both occupancy levels and sales with 2 million hotel rooms sold – up 4% on the previous year. The figures for guesthouses, B&Bs and guest accommodation were also very positive.

“One of the biggest success stories of our tourism offering is Game of Thrones® which brings tens of thousands of fans here. Many successful visitor experiences have been created around this series and continue to contribute to our tourism economy. Tourism NI estimates that in 2016 more than 120,000 visitors were influenced by Game of Thrones® in their decision to visit Northern Ireland, generating around £30m in the local economy. The Game of Thrones® tapestry currently on display at the Ulster Museum until the end of August 2018 has welcomed more than 130,000 visitors since opening in July 2017.”

Early signs for 2018-2019 are also very positive with latest tourism performance statistics released by NISRA this week for January to March 2018 indicating a positive first quarter of 2018 for NI Tourism, particularly in terms of visitor spend. Visitor spend reached record levels of £180m during January to March 2018, an increase of £13m compared with the same period in 2017[ii].

John McGrillen concluded: “These early signs bode well for what will be another significant year for tourism and next July the eyes of the world will be on Northern Ireland when The 148th Open, Royal Portrush which is already almost sold out, takes place. Stunning images of our beautiful Causeway Coast will be broadcast to more than 150 countries to an audience of 80 million people. That is an unprecedented opportunity to showcase the beauty of our landscape, the warmth of our welcome and unique experience that is Northern Ireland.”