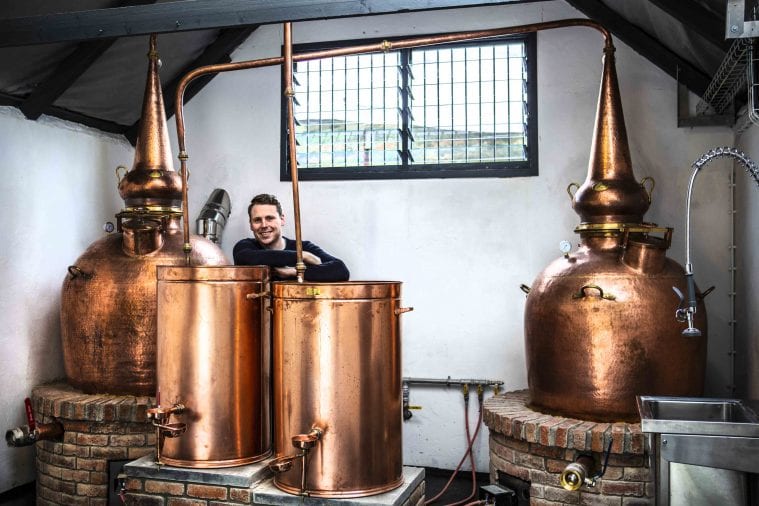 Brendan Carty used all his skills and experience as an architect to design and build Killowen Distillery – his own whiskey and gin distillery in a picturesque and remote location in the Mourne Mountains overlooking Carlingford Lough, writes Sam Butler.

He’s recently completed the Killowen Distillery, near Rostrevor, and is soon to launch a gin using botanicals handpicked from the slopes of the iconic Mournes

Brendan, from Warrenpoint, has realised a long-held ambition to build his own distillery and to create an Irish whiskey that’s different from most currently being distilled in Ireland. Killowen features two copper pot stills which are flame-fed. Grain for distilling is also smoked slowly in a chamber lined with sustainably sourced turf.

“My aim has been to create an Irish whiskey from traditional techniques over flame,” Brendan continues. “The whiskey, Kilbroney, being produced here is also different in that it is double distilled unlike others in Ireland which are triple distilled,” he says.

He’s been working on the distillery since returning from Australia in 2017, having decided to explore career opportunities there in architecture. “I went to look for work in Australia in 2014 because the recession led to a sharp decline in building jobs here,” he adds.

He used his spare time to study distilling techniques there and especially in Tasmania, home of the renowned Belgrove Distillery.

“Belgrove is probably one of the world’s greenest distilleries, “Brendan continues. “It grows its own grain and distils rye whisky using biofuel – recycled cooking oil – which fires a copper still built by the owner.

“All the other machinery is also driven by biofuel. Spent mash from the distilling process is fed to the Belgrove sheep. Water for brewing is harvested from rain troughs. Yeast is often reused in what is a sustainable operation with the lowest food miles,” he adds.

Knowledge garnered studying distilling in Australia encouraged him to return to Ireland and to build his own small batch distillery.

Brendan shaped the two pot stills from an ancient design. The distillation, in addition, uses worm tub condensation, the only distillery in Ireland to use this historic technique. A worm tub is a traditional way of turning vapour into liquid for “a complex whiskey with a distinctive character and a richer flavour”.  Kilbroney, the single malt whiskey he’s creating, is named after a popular leisure area nearby.

“Our water comes from rivers coursing through the mountains and is filtered by ancient stones. Grain is also locally sourced,” he adds.

While regulations require that the distilled spirit can only be labelled whiskey after three years and a day, Brendan has also created his own Killowen Gin for launch in March. This will provide essential cash flow over the next three years and longer until the whiskey is ready.

The gin will be launched shortly and features spirit blended with natural ingredients he’s picking from slopes nearby. The mountain botanicals give the gin a distinctively rich flavour from heather, wild mint, crab apple, elderflower, elderberries and sweetly scented angelica root. He’s even planted juniper trees beside the distillery for the classic gin flavour. The result, he says, is “an unusual gin celebrating its maritime and highland environment within the Mourne”.