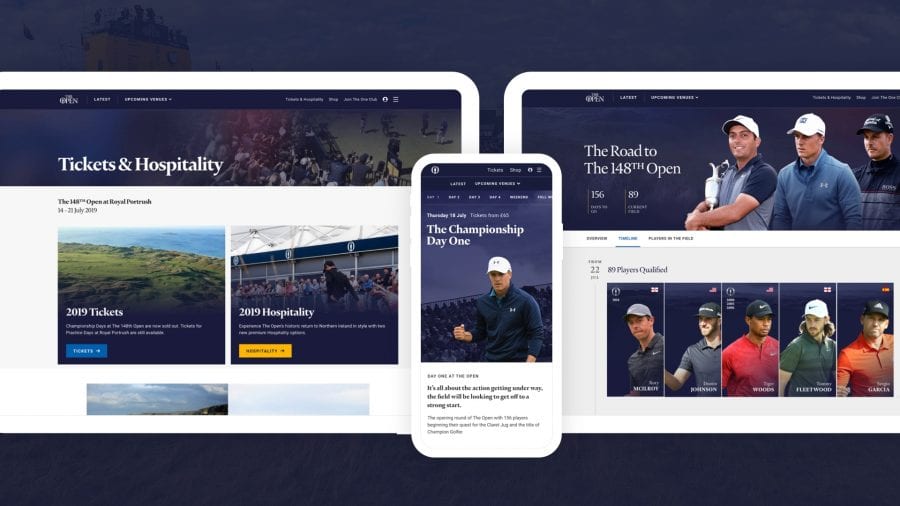 The R&A has launched a new version of its website TheOpen.com with its digital agency, Delete, to enhance the digital presence for golf’s original championship ahead of its historic return to the famous links of Royal Portrush in July.

The purpose of the new website is to give fans the best experience of The Open, whether they are attending the Championship or following it online along with millions of others around the world.

TheOpen.com will re-engage existing fans and capture new ones with a refreshed website that pushes The Open to the forefront as one of the world’s leading sporting events.

Kevin McQuillan, Head of Marketing at The R&A, said, “While heritage and tradition are important to The Open’s standing as one of the world’s most revered sporting events, it is also vital that innovation enables the Championship to grow its following worldwide.

“We are delighted with the new platform Delete have developed, which will enable us to provide fans with an immersive, enriched all year round experience.”

Damon Mangos, Head of Strategy at Delete, added, “We are delighted to be working with such a prestigious organisation as The R&A, and on one of the world’s most iconic sports Championships. With the battle for fan attention never greater, The R&A team briefed us to deliver a website that would lead not only within the golf industry but also in the wider sports world. We believe we have delivered on this.” The 148th Open at Royal Portrush takes place from 14-21 July and will be responsible for driving the majority of this year’s traffic to TheOpen.com.

While an improved fan experience is the motivating factor for the creation of the new website, supporting The R&A’s commercial goals is another important driver of this new site. These are to sell out every Open Championship, to grow The One Club (The Open’s own membership platform) and maximise the number of fans engaging online with The Open during both the Championship week and year round.

With a broadcast rights partnership in place for The Open with Sky Sports since 2016, the website has become an important brand touch point and hub for wider fan interest. With a goal to broaden interest outside the tournament week, Delete have set out to deliver a rich and dynamic digital interface to capture interest and drive repeat visits throughout the year.

The new site allows The R&A’s marketing team move away from a single event focus, and to instead seamlessly promote the next three Open events all at the same time – building anticipation and demand ahead of each Championship.

With growth of The Open’s membership club ‘The One Club’ a key commercial goal, a single customer account – delivered through a new SSO approach – will deliver the beginning of an integrated customer account experience for signed-in ‘One Club’ members. Over time, this will include: advanced ticket purchase and management; access to new UX features and premium content around the tournament; and an integrated retail experience.

The initial launch in February is focused on boosting interest and engagement in the build up to the Championship throughout qualifying and creating a year round destination for golf fans.

By July 2019 the second major phase of the website will be released to coincide with the Championship’s staging in Northern Ireland. The new live takeover event mode for the site will deliver a best-in-class digital fan experience and better convey the drama and excitement of The Open.

Delete were appointed by The R&A as their lead digital agency at the beginning of 2018, adding to the agency’s growing sports roster which includes The FA and Premier League football club Southampton.