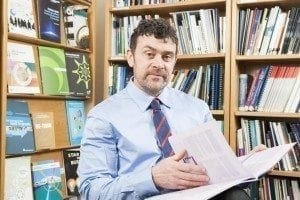 It has been 20 years since the signing of the Good Friday (Belfast) Agreement and the establishment of InterTradeIreland as a North/South Implementation Body with a legislative mandate ‘to exchange information and co-ordinate work on trade, business development and related matters’.  Aidan Gough, Designated Officer and Director of Strategy and Policy at InterTradeIreland reflects on the progress made over the past 20 years, a period over which InterTradeIreland engaged with nearly 40,000 businesses, directly supporting 9,000 to create added business development value of £1bn and 14,800 jobs. Increased co-operation in trade has been replicated in innovation and research partnerships, driving further value

Small busineses have benefitted from participation in InterTradeIreland’s suite of trade supports particularly our sales and marketing programme, Acumen, with the average benefit for participants being £250,000.

In fact, recent research by the Department for the Economy and the Northern Ireland Statistics Research Agency3 (NISRA) concludes that two-thirds of Northern Ireland goods trade with Ireland can be considered to be part of supply chain activity when meat and dairy products (known to be predominantly intermediate in nature) are considered

InterTradeIeland’s own research has shown that exporting and innovation are two pillars of successful businesses and our cross-border supports reflect this fact. Since 2001 our FUSION initiative has assisted over 600 industry-academia collaboration projects generating an average return of £850,000 per company.

Our all-island Challenge Programme speeds up the time it takes businesses to bring products to the market by 2-3 times.  The benefits and value of collaborative partnerships and networks have also been apparent in the success of the US-Ireland R&D Partnership in which 49 projects to a value of £60m have been approved in areas such as health, science and engineering, telecommunication energy and sustainability.

The value of collaborative working has also been shown in North/South partnership involvement in EU Research frameworks. Within the first two years (2014-2016) of the Horizon 2020 programme, North South applications and drawdown was almost double that of the previous programme, FP7.

Further opportunities to be explored

Clearly cross-border cooperation has delivered tangible benefits particularly but not exclusively to smaller businesses across the island.  With only 15% of goods produced in Northern Ireland being exported beyond its border, and only 1.6 % of Irish goods exports going north, there are still plenty of opportunities for the further growth that cross-border trading delivers while the development of cross-border research, development and innovation partnerships is building an all-island community that will create further synergies.