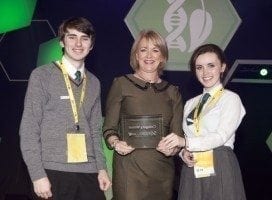 The winners of the 50th BT Young Scientist & Technology Exhibition have been announced. Northern Ireland students who this week showcased their projects at the prestigious event, have been formally recognised at the awards ceremony.

Beating off stiff competition from 28 Northern Ireland finalists Wellington College, Belfast won five awards at the ceremony. The school won the ‘Best Northern Ireland School Award’ sponsored by MATRIX, received the Display Award and the 1st – Senior Group award for their project ‘Health claims and risks pertaining to the biochemical properties of grapefruit’ which was entered into the Biological and Ecological Sciences category.  Wellington College also won the ‘Institute of Physics in Ireland’ Special Award and was highly commended for their project ‘The detection and impact of solar flares in the upper atmosphere.’

Colm O’Neill, CEO, BT Ireland said, “When we set out last year to plan for the 50th BT Young Scientist & Technology Exhibition we wanted to make sure that this was our most exceptional event to date. I’m delighted to say that it has exceeded all of our expectations. Over the past three days we have had some of Ireland’s brightest, most creative and positive young people astound us with their ideas for a better future and we have been greatly impressed by the high standard of these entries.

He added, “Over the years the exhibition has proven to be an important launch pad for the next wave of entrepreneurs, academics, scientists and technologists; people who will be fundamental in addressing the global skills shortage.  For that reason, we cannot underestimate the importance of this exhibition in encouraging our young students to pursue careers in science and technology. I would like to congratulate every single student who participated this week.  If our past winners have taught us anything, it’s that this award could change their lives.”

Teacher David Cardwell from Wellington College said, “We are delighted to receive all of the awards and once again the exhibition has proven to be a wonderful experience for our pupils who have found it immensely rewarding and interesting. The exhibition is a great way to encourage young people to get involved in STEM subjects and provides a platform to showcase our scientific skills. I love encouraging and nurturing an interest in science in an enjoyable way and we are thrilled that the students were recognised for their hard work in creating some really interesting and innovative projects.”

Fifth year student Paul Clarke, aged 17, from St Paul’s College, Raheny in Dublin has taken home the top prize for his project entitled, “Contributions to cyclic graph theory”. The announcement was made in the BT Arena at Dublin’s RDS this evening by Ruairi Quinn, TD Minister for Education and Skills and Colm O’Neill, CEO, BT Ireland.  Paul was entered in the senior section of the Chemical, Physical and Mathematical Sciences category.

Paul was presented with a cheque for €5,000, the opportunity to represent Ireland at the 26th European Union Young Scientist competition taking place in September and a brand new trophy. As this year’s winner, Paul will also win a once in a lifetime trip to Silicon Valley in California, home to some of the world’s biggest technology corporations, to meet BT’s Innovation team, and will enjoy a hosted tour of leading enterprises and meet business leaders from the world of science and technology.

In all, almost 1,165 students from 32 counties covering 550 projects from 210 schools nationwide competed for the coveted title ‘Winner of the BT Young Scientist & Technology Exhibition 2014’.

The BT Young Scientist & Technology Exhibition continues on Saturday, 11th January 2014 when Commander Chris Hadfield will touch down to sign copies of his book, An Astronauts Guide to Life on Earth. Doors are open from 9.30am.