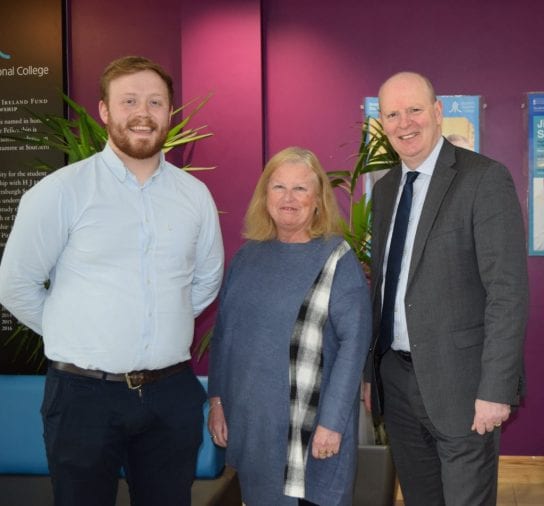 A talented team from Southern Regional College is celebrating after each securing one of the world’s most prestigious endorsements for their achievements in digital marketing and leadership in education – as  lecturer Marilyn Warren and student Matthew McKeown awarded City & Guilds’ Medals of Excellence.

A world leader in global skills development, the City & Guilds programme recognises success amongst learners and their tutors and international competition for the sought-after recognition is intense.

Demonstrating ‘highly developed skills, outstanding knowledge and adaptability’, SRC student Matthew McKeown was awarded his Medal of Excellence for producing an innovative video about his course and his experience at the leading college.

Matthew is currently undertaking a Higher-Level Apprenticeship in Digital Marketing while gaining valuable experience within the College’s fast-paced marketing department.

SRC lecturer Marilyn Warren was also recognised by City & Guilds, receiving a coveted Medal of Excellence for not only being a champion for learning, but for her ‘enthusiasm and outstanding subject knowledge’.

Brian Doran, Chief Executive at Southern Regional College, congratulated them both on their commitment to succeed.

“City & Guilds is a global leader in skills development and its acknowledgement of the efforts of our students and staff is a wonderful achievement.

“Both Matthew and Marilyn have not only demonstrated their knowledge, talent and passion in their chosen field but also in their ability to compete and win.

“On behalf of everyone at SRC, I congratulate them both and I wish them continued success in the months and years ahead.”

The annual City & Guilds Medals for Excellence programme, which is more than 100 years old, awarded 60 medals this year to students and staff from across the UK, Ireland and around the world.

The award-winning college is currently top of Northern Ireland’s official Further and Higher Education leader board after confirming its ‘best performing’ position in an annual independent report published by the Department for the Economy NI and the Ulster University Economic Policy Centre.

SRC is the largest Further and Higher Education college outside of Belfast, with major educational facilities based in Armagh, Banbridge, Kilkeel, Lurgan, Newry and Portadown.

With over 34,000 full and part-time students, these six campuses deliver a wide range of higher level professional and technical courses.