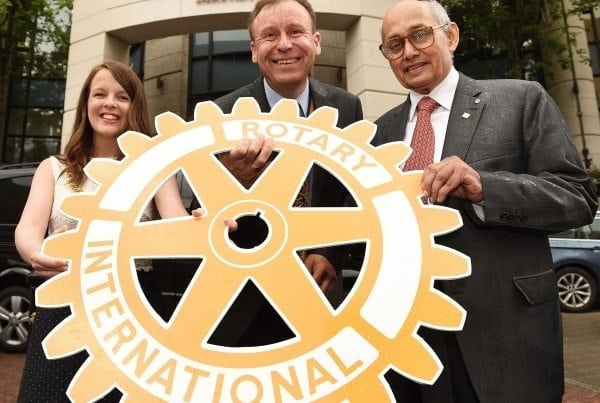 Rotary’s biggest ever celebration is underway – a year-long, global celebration of The Rotary Foundation’s 100 years of Doing Good in the World.

And this week that celebration came to Belfast, with the arrival of Kalyan Banerjee – The Rotary Foundation Trustee Chair and 101st Rotary President – who has made the visit from the Rotary Club of Vapi, Gujarat, India.

Making an address at the Europa Hotel, as part of a three-leg trip which saw him visit Cork and Dublin, Banerjee thanked Northern Irish Rotarians for their help in eradicating Polio world-wide and made a call for one final push to help end the disease. He urged every Rotarian to pledge a minimum of $30 a year for the next 3 years, the funds will be matched by the Bill & Melinda Gates Foundation and Polio will be eradicated once and for all.

The first recorded case of Polio in Ireland was in 1941 and by 1956 an epidemic had broken out across the country, including County Cork which had 90 notified city cases. By 1985, there were more than 350,000 cases of Polio globally. Today, to-date in 2017, there have been just six reported cases of the disease world-wide. Primarily thanks to the work of Rotary, we are on the cusp of ending this paralyzing, life-altering scourge which will be the second human disease, after smallpox ever to be eliminated.

In 1985 the Rotary Foundation launched its PolioPlus program – the first initiative to tackle global polio eradication through the mass vaccination of children. Since then, Rotary has contributed more than €1.46billion and millions of volunteer hours to immunise more than 2.5 billion children in 122 countries. In addition, Rotary’s advocacy efforts have played a role in decisions by donor governments to contribute more than €6.4 billion to the effort which has lead to a 99.9 percent decrease in cases since PolioPlus launched.

Addressing Rotarians at a lunch event in the city, Banerjee went on to congratulate Irish Rotarians for the fundamental humanitarian work they had been doing since 1911 when Rotary first came to Belfast.  He encouraged as many people as possible to get involved in the century-old organization to enjoy fellowship, meeting new people to interact and gain from these interactions.

During his speech, Banarjay announced Rotary’s commitment to raise $50 million (€44,740,728) per year over the next three years, with every dollar to be matched with two additional dollars from the Bill & Melinda Gates Foundation. This expanded agreement will translate into $450 million (€402,234,646.50) for polio eradication activities, including immunisation and surveillance over the next three years. This critical funding helps ensure countries around the world remain polio-free and that polio is ended in the remaining three endemic countries: Afghanistan, Nigeria, and Pakistan.

Banerjee concluded his address by making a call for Irish Rotarians to help with the final push in efforts to help the eradication of Polio.

Rotary brings together a global network of volunteers dedicated to tackling the world’s most pressing humanitarian challenges. The Foundation connects 1.2 million members of more than 35,000 Rotary clubs in over 200 countries and geographical areas. Their work improves lives at both the local and international levels, from helping families in need in their own communities to working toward a polio-free world. There are 53,000 Rotarians in Great Britain and Ireland in 1,850 clubs tackling a host of humanitarian issues includling hunger, poverty, illiteracy and peace.

For information on how to join Rotary Ireland, visit www.rotary.ie.