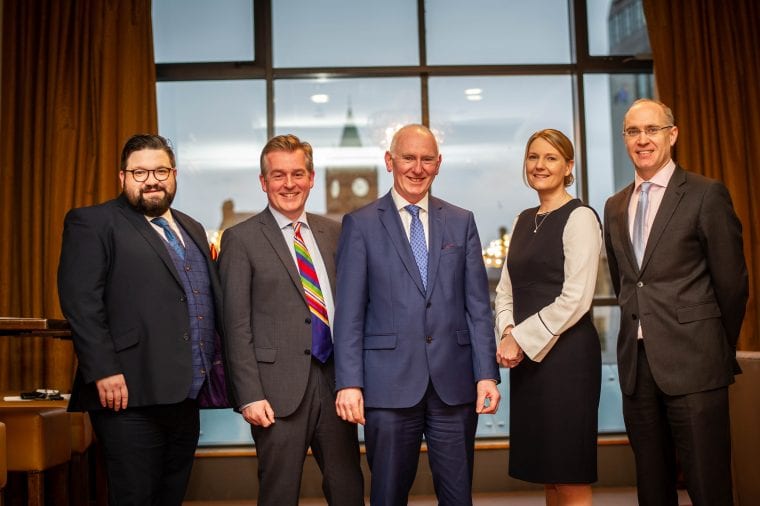 Over 100 guests from the local business community turned out to the City Hotel for a Brexit Breakfast hosted by the Londonderry Chamber of Commerce in association with international law firm Eversheds Sutherland on Friday.

Hosted by Broadcaster Mark Carruthers, the event included Brian McGrath, President of the Chamber and Chief Executive of Foyle Port, Aodhán Connolly from the NI Retail Consortium and Lisa Bryson, Head of Employment and Immigration at Eversheds Sutherland.

The keynote address was given by Peter Curran, Partner at Eversheds Sutherland which has offices in Dublin and Belfast.

Brian McGrath, President of the Londonderry Chamber of Commerce said: “This was a timely event as we are now at the sharp end of the complex debate on Brexit.”

“It was clear from the mood of the business community that a no deal Brexit would be a disaster for businesses and companies in the North West region. Given our proximity to the border and reliance on seamless cross-border trade and travel, local businesses expressed in no uncertain terms that they would be acutely impacted by the fall out of a no deal.”

We only have to remind ourselves of the letter last week from the Head of the Civil Service, David Sterling that a no deal Brexit does not come with any guarantees about the continuation of cross-border trade as we know it. We must have a frictionless border so that businesses and people across the North West can continue to do what they do every day. Many guests at the event said that it is vital that we have the softest Brexit possible and avoid a no deal at all costs.”

The event comes after Eversheds Sutherland issued a warning that the vast majority of businesses in Northern Ireland have still not started preparing for the legal ramifications of Brexit, launching a ‘Brexit checklist’ in response.

The law firm, one of only a handful of firms awarded Tier 1 status for their Brexit-related legal advice by the Legal 500, has warned that Northern Irish Small and Medium Enterprises (SMEs) have still not done enough to prepare themselves for the potential impact on their business as things stand at the moment with less than a month to go before the UK is scheduled to leave the EU. The simple checklist has been launched to support and assist clients in assessing some key Brexit-related legal risks.

Despite businesses being urged to review their operations to put in place contingency plans, according to a recent survey carried out by AIB, only 2% of SMEs in Northern Ireland have a formal Brexit plan in place. SMEs are defined as companies that employ less than 250 people and the Federation of Small Businesses (FSB) has estimated that they account for approximately 75% of the private sector employment in Northern Ireland.

Uncertainty around whether a Brexit deal will be agreed and what that deal might look like has meant that many businesses have been unsure of the best way to prepare and this uncertainty has prevented many from even starting.

Lisa Bryson, Partner, and member of the Eversheds Sutherland Ireland Brexit hub who was one of the panelists at the event on Friday said: “Brexit is the biggest political, constitutional and economic change to these islands in over half a century. It is a cause for some concern that there are so many Small and Medium Enterprises that have not started formally planning for how it’s going to impact on their businesses, but it’s not too late to start.”

“Of course, it can seem counter intuitive to plan for something that may not even happen. As negotiations between the UK and EU continue up until the last minute and with the Prime Minister offering MPs a chance to prevent a no-deal Brexit, some may feel that they are being asked to prepare for the unknown or the unlikely.”

“However, this uncertainty is all the more reason for businesses to prepare. Whether the UK and the EU agree a deal or there’s a no-deal Brexit or even if there’s a delay to the whole process, it is vitally important that firms, especially SMEs realise just how much this can impact on their business.”

“It’s not just tariffs. Brexit has the potential to affect employment law and the ability of firms to hire EU nationals which can have a significant impact especially on the agri-food sector. It also has the potential to have an impact on contracts with customers and suppliers.”

“We have created a simple checklist to support and assist clients in assessing some key Brexit-related legal risks.  It serves as a prompt for the type of questions businesses should be asking and provides an indication of those areas in which a further audit or more detailed advice or assessment would be beneficial.  Of course this checklist does not address every conceivable eventuality so it will be important for each business to consider its own particular circumstances based on factors such as its location, trading relationships in the EU, regulatory environment, location of key customers and suppliers, as well as the make-up of its workforce.”

“If you haven’t done any planning at all yet, this checklist is a good place to start asking the questions which might present some legal risk to your business so that you can take steps to mitigate against those risks. You should also remember that you do not need to do this alone.  Many trade organisations have Brexit guidance available which consider in detail matters such as trade, customs considerations, taxation arrangements and the importance of understanding your supply chain.  Furthermore, InterTrade Ireland and InvestNI both have schemes in place which can provide financial support for Brexit-related planning, including legal advice from Eversheds Sutherland.

“We have a Brexit hub dedicated to providing legal advice to firms of any size and anyone seeking further help should get in touch.”