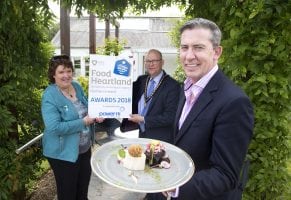 Almost 30 of Northern Ireland’s finest food and drink producers, exporters, eateries, retailers and innovators have been awarded a final place in this year’s Food Heartland awards.

Businesses shortlisted for the awards, which champion and celebrate the passion, quality, innovation and success across the Armagh City, Banbridge and Craigavon area, were carefully selected after a tough judging process spearheaded by Paula McIntyre and Noel McMeel.

Moy Park, The Yellow Door Deli, Quails Fine Foods, Armagh Cider Company and Harnett’s Oils are all up for an award this year following a record number of entries.

Some of the region’s finest eateries, including Groucho’s On the Square, Linen Hill Kitchen Deli, Molly’s Mill, Newforge House, Sinton’s at the Bridge, The Friary Restaurant and The Vault are also hoping for a big win.

Since entries for the competition closed in early July, judges have been interviewing, taste-testing and sampling a wide variety of delicious dishes as part of a hectic schedule to whittle down the nominees.

“The standard of entries has been second to none, with a wide variety of amazing food establishments, artisan producers and outstanding drinks and food suppliers showcasing their exceptional products and shining a light on everything this wonderful borough has to offer,” Deputy Lord Mayor of Armagh City, Banbridge and Craigavon, Councillor Paul Duffy, said.

“The judges have a big task ahead of them determining the winners from such an abundance of high quality entries. I would like to congratulate all the shortlisted entries and look forward to the awards gala evening on 12th September at the Palace Demesne, Armagh.”

The borough is home to a wealth of high quality food and drink as well as world-renowned products with protected status – Armagh Bramley Apples and Lough Neagh Eels.

The winners will be announced at an awards gala evening which will take place on Wednesday 12 September at the Palace Demesne, Armagh.