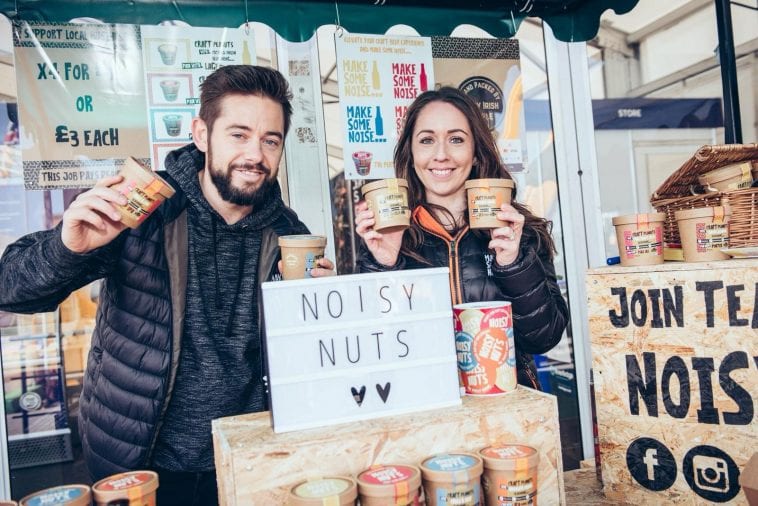 Ballygowan-based Noisy Nuts, a specialist in flavoured peanuts to accompany craft beers, is poised to accelerate the growth of sales in Britain. Noisy Nuts is a Food NI member company.

The small company, owned and managed by Noel Allen, an experienced marketer who launched the Boost drinks brand successfully in Northern Ireland, has linked up with leading distributors to expand sales in Britain.

The development follows the small firm’s participation in last year’s BBC Good Show in Birmingham and last week’s Scotland Speciality Food Show in Glasgow on a stand organised by Food NI in association with Invest NI.

Mr Allen says interest in Britain is “growing strongly from its participation at major trade and consumer shows”.

The difference between Noisy Nuts and other peanut snacks is the inclusion of self-seasoning foil sachets in a handy cardboard tub. Each sachet features different flavours.  Noise results when the seasoning is sprinkled over the peanuts and the tub shaken to ensure the distinctively rich flavouring coats all the nuts – hence Noisy Nuts.

The seasonings, he has developed, are designed to accentuate the characteristics of individual craft beers.

“My light bulb moment came when I was enjoying a local craft beer with peanuts, something people here do regularly. I noticed that the nuts changed the taste of the beer and this led me to think seriously about creating a versatile snack to go with the drinks.

“I came up with the idea of flavourings, various seasonings created to match the beers, the India Pale Ales, lagers and stouts. I then had to find a way to deliver the seasonings within an overall pack of peanuts.

“While it seemed like a great idea, I realised that it would only work if there was a market opportunity for such an innovative snack. The first stage was to carry out desk research into the craft beer and snack markets. The craft beer segment grew by 14 percent last year, and is projected to expand by a further five percent at least this year.

“With 400 different craft breweries in the UK – 40 of them in Northern Ireland – and more than 3,500 different craft lagers, ales and stouts on sale I knew there was a serious business opportunity. Craft drinkers are all about taste, different tastes from beers largely brewed by hand by enthusiasts. Noisy Nuts gives them a tasty snack that will enhance their drinking experience,” he adds.

He has developed a six-strong range of snack tubs of peanuts which are available with different self-seasoning sachets in flavours such as pickled onion, chilli and lime, chilli beef and Thai sweet chilli.

“Consumers can pour the whole seasoning sachet in and shake the tub giving a strong flavour or season as they wish to fit with their beer drinking taste. Either way makes a noise!” he continues.

Another feature of the new snack range is a recommendation with each flavour on the type of beer it suits best.