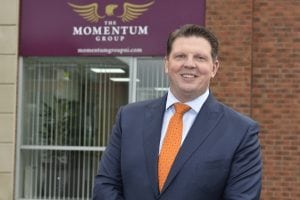 Focused solely on R&D Tax Credits, the company works across most sectors of industry with expertise gained in the last decade working with over 500 companies throughout the UK.

The latest annual statistics from HMRC show there has been a slight decrease in Northern Ireland companies claiming R&D Tax Credits, which are designed to drive innovation.  Northern Ireland is also still significantly behind many other regions of the UK, compared to regions such as South-East England which secured £660m in R&D tax claims and West Midlands which claimed back £295m.

The average received per R&D tax claim by companies in Northern Ireland was £46,000.

Overall, Northern Ireland accounted for just 3 per cent of total claims and 2 per cent of the total tax benefits claimed.

Tom Verner, Group Managing Director, Momentum R&D commented: “While HMRC statistics show many companies in NI are wakening up to the benefits of R&D Tax Credits, the potential is far greater.   In our experience, there are still so many local businesses that are either not aware of R&D Tax Credits, incorrectly think they do not qualify or feel they lack the necessary experience to submit a claim.   In fact, many companies are not claiming their full legitimate entitlement.

“At Momentum, we helped a record number of NI companies with R&D Tax Credit claims in 2017.   These are often highly innovative companies, who can reinvest these savings into technological innovation that bolsters their businesses, NI exports, employment and the local economy in the wake of Brexit.”

Momentum is calling on more NI businesses to act now on R&D Tax Credits, highlighting that the regional statistics could be much higher given the increasing investment in export here, with Verner adding:

“For NI to be truly competitive, it is vital that companies recognise the potential of this very accessible UK government incentive.  At the very least we should be on par with the rest of the UK.

While seeking in-depth advice is vital, with an increasing number of accountancy practices availing of our R&D expertise, we assist local businesses every month that have benefitted by between tens of thousands and hundreds of thousands of pounds.  Given the potential, we find it startling that more companies aren’t claiming, and we have made it our mission to highlight the incentive, particularly on occasions like today when regional results put Northern Ireland at the bottom of the R&D league table!”

Momentum has helped hundreds of highly competitive NI companies, from manufacturing to construction, food & drink to technology, to claim this UK government incentive.  The multi award-winning company assists in a range of areas, investing in understanding and optimising R&D expenditure.  The team includes accountancy, business, commercial and ex-HMRC technical experts to ensure every claim gets the necessary expert scrutiny and is thoroughly investigated.

Founded in 2009, Momentum is one of the longest established R&D advisory companies in the UK.   It is also the only R&D tax practice that focuses on providing advice on long-term R&D strategies, offering a complimentary annual review to its client enabling them to assess current and forward-plan future research and development projects.

Ron Gibson, Momentum’s Operations and Technical Director, who sits on HMRC’s R&D Consultative Committee, added: “In an unregulated area, involving often complex financial review, we find increasingly that owners, managing directors, financial controllers and their accountants are turning to the experts to navigate through this intricate R&D tax area.”

Momentum works with an increasing number of accountancy practices, business and financial consultants across the Northern Ireland and the UK who partner with the specialist tax credit advisory firm to enhance their service to clients, reduce workload and grow their businesses.