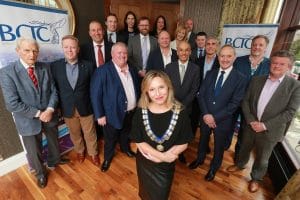 Michelle joins as the fourth female and 105th President of Belfast Chamber of Trade and Commerce which was set-up as the voice of the Belfast business community in 1912.

Michelle takes over the chain from outgoing president Gordon McElroy who served for one term.

Speaking at the AGM event held in the Europa Hotel, Gordon McElroy said that his year as President had been one of the most exciting, rewarding and busy of his career.

He said it was a year which began with the launch of the Chamber’s Belfast Manifesto – a blue print for helping make Belfast great over the next ten years.

He said he believed that when it was launched at Stormont in September 2016, he felt that the messages did fall on fertile ground, however the collapse of the Executive brought that to an end.

He said this breakdown was very bad for business and with the end of the election period he called for those in power to get back to the business of running the country.

He said that we should look for the benefits which Brexit will bring and work more closely with our allies in Dublin to further open the Irish corridor to help us all do better business together and explore further opportunities.

Gordon concluded his speech by welcoming the newly elected Chamber President and pledged to continue to help Belfast reach its full potential.

Michelle Greeves began by saying that she has come into the role with an immense sense of pride, passion and commitment.

She paid tribute to Gordon and the work that he and her fellow Executive Council members had carried out over recent years.

She quoted Einstein saying we cannot expect to be “doing the same thing over and over again and expecting different results.”

She made a call for her Executive Council members and those in elected power to start thinking about how we might approach things differently in Belfast.

She said she wants her term to focus on what we can achieve and can influence and to pull together as the leading lobbying group and voice of the business community of Belfast to do just that.

She made the example of how Brexit has changed the course of history but that it did have one huge silver lining for Northern Ireland. She has experienced first-hand the influx of visitors from the Republic of Ireland which have brought so much business to retail and hospitality in the city.

Michelle Greeves concluded that in the climate of change which we all face ahead of us that we must focus on the opportunities and maximise them to the best of Belfast’s benefit.

For further information about the work of Belfast Chamber of Trade and Commerce, please log on to: www.belfastctc.com or call 028 9024 2111.