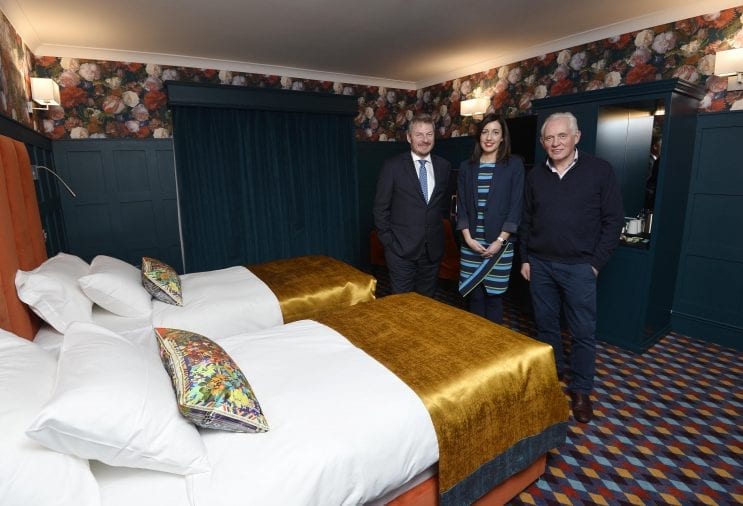 New luxurious guest accommodation has opened in Carrickfergus following significant investment by a local entrepreneur, supported by Ulster Bank. Walter’s Place, located along the Carrickfergus seafront, officially opened its doors to guests in June following an almost £400,000 investment in the purchase of the property, its design and contemporary fit-out.

In 2013, Jack, who also owns the hugely successful neighbouring bar Ownies, purchased the dilapidated property to extend the award-winning bar’s kitchen. With no further use for the remainder of the property, Jack identified a gap in the local market and highlighted the need for more out-of-city luxury accommodation.

“It became clear very early on that there was a real need for additional luxury accommodation in the Carrick area,” he said. “After we extended the kitchen of Ownies bar into the site we were left with a large piece of undeveloped real estate, so we were keen to identify a practical and profitable use for it.

“We’ve been providing a comfortable space to dine and drink at Ownies bar for the past 17 years, so the development of guest accommodation to extend our reach was a natural progression.”

He added: “It was important to create something different too. Options in the area for high-end accommodation are limited, so we were determined Walter’s Place would be memorable and this is reflected in its design. We’re providing all the charm expected from a high-end boutique hotel at a competitive price point to guests looking that bit of added luxury from an out-of-city venue.”

Over the summer months the guest accommodation boasted high occupancy rates between 70 and 80 per cent.

“The reception to the opening in June was overwhelmingly positive and we’re still recording occupancy rates similar to those over the busy summer period,” Jack explained.

Planning permission has been submitted to extend Walter’s Place by developing another property on the same road.

“We’re hoping to add a further four rooms to cater for families. These will be self-catering and pet-friendly spaces for groups looking to stay the little bit longer,” Jack added.

Gemma Jordan, Senior Relationship Manager, Commercial Banking NI at Ulster Bank, said: “Ulster Bank is thrilled to have supported the development of Walter’s Place. It has raised the bar for luxury accommodation in the Carrick area and is on a par with what a guest would expect to see from five-star accommodation in any major city. Its location on one of the main arterial routes in and out of Belfast city is a positive selling point and since opening has proved an instant hit with tourists looking for a memorable and luxury stay, but most importantly one that is also affordable.”

Echoing these comment, Girvan Gault, Commercial Banking Director at Ulster Bank, added: “Walter’s Place is a visually stunning new tourism asset for the Carrick area, and Ulster Bank is pleased to have supported the development. We are committed to supporting SMEs and well-run local businesses to continue to grow and nurture new commercial opportunities. The venue is already proving a resounding success, attracting a steady stream of international bookings.”