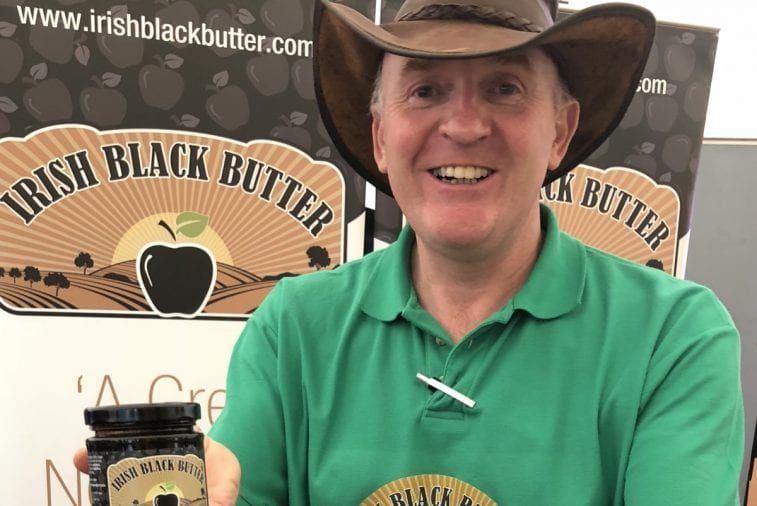 Irish Black Butter, the unique spread created by Mr Bell, a native of Portrush, in 2018, is also now attracted interest in retailers in New Hampshire also in the US, from Germany as well as from Britain.

Irish Black Butter, a Food NI member company, is made from Armagh Bramley apples and also features brandy, treacle and spices. The product has won awards for its distinctive taste. The spread was recently praised by celebrity chef James Martin on his BBC cookery programme about Northern Ireland food.

Mr Bell is understandably thrilled by the interest from outside Northern Ireland at the new product developed and manufactured in Northern Ireland. “The discussions which could soon see the product on sale followed our participation on the Food NI/Invest NI stand at the big Gifted show in Dublin just before Christmas.

He has also gained sales in the London area from participation last year at the popular Borough Market there.

“We were approached by a buyer who was impressed by the taste of Irish Black Butter and keen to help us develop business with delis and independent food stores in California especially in San Francisco which has a large Irish ex-pat community.

“I am following us the new approaches actively from the US and Germany and would be confident of doing business in both soon. Our participation at Scotland’s Speciality Food in January also produced a host of business leads which are being pursued.

“I now have arrangements with distributors in Britain as well as in the Republic of Ireland,” he adds. “Taking part at Gifted was also important in that it supported Sheridan’s, my distributor in the Republic,” he continues.

Irish Black Butter was developed by Mr Bell to harness the business potential of Bramley apples, one of our most iconic products which has earned EU protected status.

The product is available in around 100 outlets in Northern Ireland including deli, farm shops, butchery businesses and independent stores. It is also now on the shelves at Dublin International and Belfast International airports.

“Taking part in trade shows such as Gifted and Scotland’s Speciality Food have become an integral part of my marketing plan,” he says. “These enable me to showcase the product and give potential customers and shoppers to taste Irish Black Butter,” he adds.