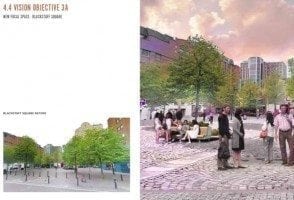 Belfast City Council is holding a consultation exercise which will run until Friday 11 March seeking public views on the future development of the Linen Quarter.

In the summer, the council appointed Planit Intelligent Environments, an urban design and landscape architect practice, to prepare a draft public realm analysis and vision for the Linen Quarter.

Included in the proposals are redefining streets and creating new focal spaces with plans to revitalise Blackstaff Square and introducing a new central or green space within the Linen Quarter that could be used as a public meeting area or to hold outside events.

The Linen Quarter lies to the south of City Hall and includes a number of the city’s key business and public sector headquarters as well as existing and planned hotel developments – taking in Bedford Street, Linenhall Street, Adelaide Street, Alfred Street and Ormeau Avenue among other streets.

Home to the Ulster Hall and BBC Broadcasting House, it is one of the city’s main arrival points lying adjacent to the proposed £100 million Belfast Transport Hub expansion at Great Victoria Street which will become the main regional hub for bus and train services in the years ahead.

The Linen Quarter exhibition at the Ulster Hall will illustrate key elements of the vision for the area and will be available to view during February from Monday to Saturday from 10am to 5pm (with the exception of Saturday 20 February). Council staff will also be available to discuss the proposals and answer queries on Tuesday 2 February (10am – 12.30pm) and on Thursday 18 February (2pm – 4.30pm).

Councillor Matt Garrett, Chair of Belfast City Council’s Planning Committee, said: “With Council now having power over planning matters in the city, we have seen at first hand the demand for new development in the Linen Quarter area – granting approval to four hotel planning applications as well as a new office block in Adelaide Street.

“However we need to provide guidance around the future development and look of the Linen Quarter as it is an area of great historic importance due to its links with the Linen Industry as reflected through its building stock.

“The exhibition at the Ulster Hall in February will allow the public and key stakeholders to view the draft public realm and vision for the area, as outlined by Planit, and have their say on how the Linen Quarter area will look in the future.”

The council will also be holding a public meeting in the City Hall on Thursday 18 February at 5.45pm for people to provide feedback on the proposals.

The draft plan and more information on the public consultation exercise can be found on the council website by visiting www.belfastcity.gov.uk/linenquarter

The draft public realm analysis and vision for the Linen Quarter area include proposals to: