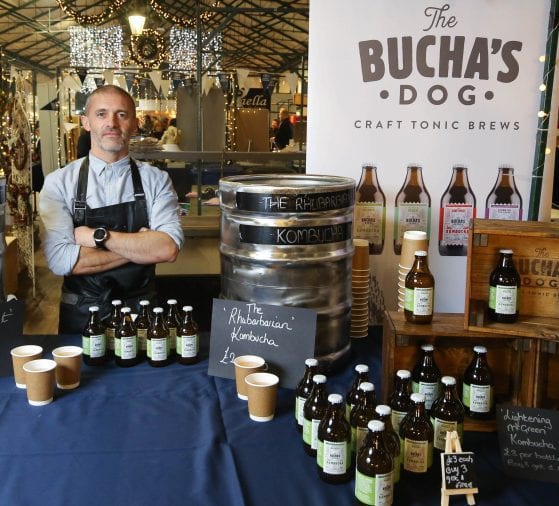 The first Kombucha, a unique beverage, a fermented fizzy tea drink, which many nutritionists reckon really is good for you, has been developed in Northern Ireland, reports Sam Butler.

The kombucha has been created by botanist Pete Barrett, a botanist, who lives near Belfast.

Mr Barrett describes kombucha as “a mildly fizzy, slightly sour tea that has fermented from the use of a mix of healthy bacteria and yeast”. “Kombucha is an ancient tonic but is increasingly seen as a healthy alternative to soft drinks and alcohol,” he explains.

“It’s completely natural. The probiotic bacteria and yeast absorb sugars into ethanol and acetic acid. Probiotic bacteria can help to balance the gut microbiome in humans and improve digestion. “It’s not unlike apple cider vinegar, which many people are familiar with for its health benefits,” he adds.

Fermented products, he continues, have soared in popularity in recent years, due to the ever increasing interest and research into gut health and its influence on not only digestion but also immunity, mood and even mental wellbeing.

The products have been found to contain antioxidants that help to protect the body. Kombucha also contains small amounts of vitamins and minerals which are produced when the yeast breaks down the sugars, including vitamin C and B, B1, B6 and B12.

His interest in botanicals is from his career as a botanist/agronomist. He graduated from Queen’s University in Plant Science and subsequently gained a doctorate in Agronomy in 2000. A research post with QUB’s Department of Applied Plant Science and then an agency, now the Agri-Food and Biosciences Institute, followed.

Mr Barrett was there for five years before moving to a business development role throughout Europe with a sustainable soil and plant nutrition company in Brittany.

Other expertise he developed was anaerobic digestion, a fermentation process that breaks down organic matter to generate renewable and sustainable energy. He subsequently set up his own consultancy here.

This knowledge of fermentation was a useful insight when he began to produce kombucha “about five years ago”. He launched his first product last month.

“I’ve taken time creating a kombucha that I enjoy,” he continues.”It was only ever intended for my consumption. More recently I found myself gradually increasing volume as more friends also enjoy it. Then it just seemed to snowball in what has become a bit of a blur until the point, a couple of months ago, when it first went to market,” he explains.

Another influence on his thinking was time spent in health and exercise conscious California, where kombucha is commonplace in food stores and cafes.

Of all the teas he experimented with over the years, he found the one he really liked conveniently available from a local importer. So, he approached them for guidance in sourcing the best tea for commercial brewing.

“This means the tea for our kombucha is premium quality, from a reliable source and fully traceable. Added to the tea is my special bio culture nurtured for almost five years. The product is a true craft brew. I brew everything myself in small batches and have total control over everything.”

He launched Lightning McGreen kombucha as his first under the overall branding of Bucha’s Dog, Craft Tonic Brews. “I wanted an identity that is quirky, a bit of fun and appeals particularly to younger consumers. It’s a play on words of the saying ‘as fit as a butcher’s dog’ with Buchas an abbreviation of kombucha. Generally, kombucha drinkers are fit too! Or at least have good aspirations.

“Lightning McGreen reflects the green tea base and the name of the gardens where it is sourced, known locally as The Place of Lightning,” he says.

He’s just launched another variety, Assamson and Goliath, brewed with a black tea from India’s Assam. He chose this new brand for a local identity. “And there’s no stronger identity than the huge cranes at the iconic Harland and Wolff shipyard,” he adds.