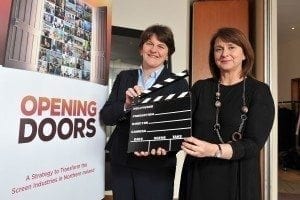 The strategy plans to invest up to £42.8million across a range of priority areas over the next four years. Full implementation of the strategy is expected to leverage a direct spend of £194million in the Northern Ireland economy.

Speaking at the launch event, Arlene Foster said: “We have come a long way over the past ten years, from a Creative Industries sector with little or no international profile to one where many of our leading production companies are focused on external or export markets.

“This reflects the expanding creative talent pool within Northern Ireland and the close working relationships that have developed between public and private sector, in particular the work of NI Screen, and my Department through Invest Northern Ireland.

“Our significant success in securing inward investment activity from some of the world’s major production companies such as Universal, Playtone and HBO has leveraged significant economic benefits for the region. Our indigenous sector has also enjoyed considerable success, with companies such as Sixteen South, Waddell Media, Dog Ears, Wild Rover and 360 Production leading the charge to bring content developed and produced in Northern Ireland to a global market.

“The Opening Doors strategy is designed to ensure that the Northern Ireland Screen industries continue to excel in what is a very fast moving global industry. The investment forecast reflects a significant uplift from the previous strategy and clearly underlines a continued commitment to the development of a dynamic and sustainable screen industry in Northern Ireland.”

Richard Williams, CEO, Northern Ireland Screen: “This is a very big day for the screen industry in Northern Ireland. Opening Doors is about maximising the opportunities in the screen industries here. With the support provided by the Minister, we are confident that the film, television drama, factual television, animation and gaming sectors will all grow significantly in the next few years.”

Invest Northern Ireland will support the implementation of the strategy with part funding by the European Regional Development Fund.