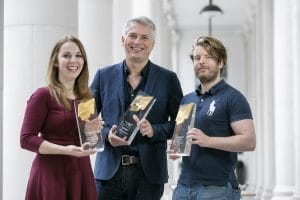 The Royal Television Society (RTS) Awards – an internationally recognised hallmark for quality and originality in television production – has returned for its second year in Northern Ireland and is inviting entries across a range of disciplines.

The awards ceremony – which is expected to attract up to 200 attendees – takes place on Thursday November 17 at the MAC Belfast.

Delivered in partnership with BBC Northern Ireland, Northern Ireland Screen and Channel 4, the awards are now open for entry now across eight disciplines. To enter log on to https://rts.org.uk/region/northern-ireland/awards

The RTS Northern Ireland Chair, and Head of BBC Northern Ireland Productions, Steve Carson said: “The inaugural RTS NI Programme Awards last year were a huge success and we’re very pleased to return once more to celebrate the excellence that resides within the local television industry.

“From independent producers, broadcasters and freelancers, output from Northern Ireland continues to make a major impact on audiences around the globe. We are very pleased to be in a position to recognise these efforts and to applaud the very best of the industry in Northern Ireland.”

Gareth Graham, from headline sponsor Performance Film and Media Insurance, said: “An RTS Award is recognised as the gold standard of achievement within the industry. With Northern Ireland achieving new heights in terms of creativity and innovation over recent years, we have no doubt that quality of entries this year will be of the highest possible standard.”

To enter, log on to https://rts.org.uk/region/northern-ireland/awards. Submissions must have aired between 1 June 2015 and 1 August 2016. Deadline for applications is 5pm on Friday 16 September.