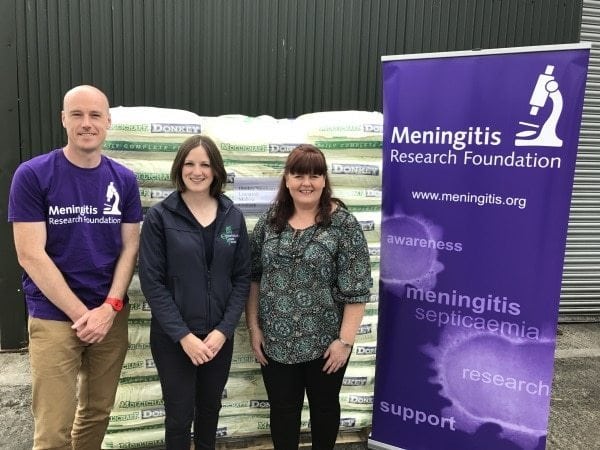 There was a great turnout of mascots with many different organisations being represented, including Equestrian and Farm Feed’s Foxy.  The competitive spirit certainly arose once the mascots were under starters orders and this resulted in three exciting races and a few unfortunate tumbles!

The clear winner was The Meningitis Research Foundation’s Marvin who romped home under the guidance of Johnny Breen.  The Foundation won a pallet of donkey chaff, donated by Equestrian and Farm Feeds Ltd, which has been presented to the Donkey Sanctuary in Mallow, Co. Cork.

Johnny commented, “It was great to see the race so well supported and we were delighted to be able to win the donkey chaff for the Donkey Sanctuary.  Many thanks to Equestrian and Farm Feeds Ltd for kindly donating the donkey chaff, in honour of Balmoral’s new mascot, Darcy the donkey, and to the RUAS for organising such a great event.”

Jenny Copeland from Equestrian and Farm Feeds Ltd presented the donkey chaff to Johnny Breen from the Meningitis Research Foundation and Jenny McNeill from RUAS, before it was gratefully received by the Donkey Sanctuary.

Equestrian and Farm Feeds’ Jenny Copeland said, “We were very pleased to be able to support Balmoral Show’s mascot race, both in donating a prize and entering our own EFF mascot.  Congratulations to the RUAS and Balmoral Show on a great initiative and one which will hopefully grow over the forthcoming years.”