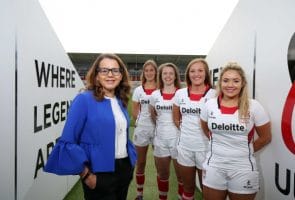 The Irish Rugby Football Union has set ambition targets to help grow participation in the women’s game across Ireland, with numbers already increasing in Ulster over recent years following the introduction of an Ulster Girls Schools Cup.

A number of players from the Ulster Women’s Rugby team have represented Ireland in the Six Nations tournament and are part of the Irish squad for the Women’s Rugby World Cup – the final of which will take at the Kingspan Stadium this month.

Jackie Henry, Senior Partner at Deloitte, said the sponsorship deal is in keeping with Deloitte’s strong track record of supporting sport at all levels.

“Deloitte is delighted to be the new sponsor of the Ulster Women’s Rugby team.  Female participation in the sport has grown significantly in the past few years and this partnership will help promote women’s rugby to a wider audience.

“This has been a great year for women’s sport in Ireland, with the Women’s Rugby World Cup final soon to be played here in Belfast, and we felt the time was right for Deloitte to throw its support behind the women’s game. Diversity is one of Deloitte’s core values and we are committed to playing our part in helping to raise the profile of women’s sport and helping to get more women and girls to take part.”

Deloitte was a major sponsor in the London 2012 Olympics and has played a major role in Ireland’s bid to host the men’s Rugby World Cup in 2023. The company has also demonstrated its commitment to gender equality by implementing an inclusive leadership culture founded on fairness and respect that has seen the firm set a target of having a 30 per cent female leadership by 2020.

Barry Willis, Rugby Operations Manager at Ulster Rugby, said: “At such an exciting time for Women’s Rugby in Ulster & Ireland, it is welcome and fitting that we will have such a prestigious company as the title sponsor of the Ulster Rugby Women’s team.

“With the backing of Deloitte, we will continue to support our top female players and provide further and better opportunities for women and girls to excel in the game.”