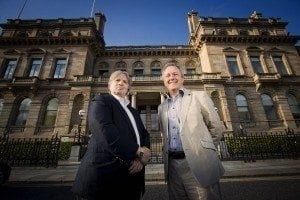 One of America’s most prolific angel investors has revealed his practical but unforgiving recipe for success for angel investment, which he says is now a legitimate equity class for some of the best financial returns.

David S. Rose, founder and Chairman of the New York Angels, one of the world’s most active angel investment groups, addressed over 150 local investors from Halo, the Northern Ireland business angel network, at Belfast Harbour Commissioners.

He said, “The goal is not to fall in love with a company but to rationally look at it. Investors don’t focus on ideas, they focus on execution. We look for the fit between the product and the market, a market itself that is growing, a management team that has experience in the area, an entrepreneur who has done it before and a business model that works and is scalable. Angel investment isn’t a short-term thing. You put your money in and it doesn’t come out until the company is acquired or, in rare cases, goes public. It sounds like a thankless task but for many investors, the rewards can be huge – both financially and emotionally.”

David is an Inc. 500 CEO and best-selling author who has founded or funded over 100 companies. He was instrumental in developing the ‘Silicon Alley’ technology community in New York.

Four local startups who were pitching, CADshare, Mycarneedsa, Briefed and Capaltec, were inspired to hear from one of the world’s best-known angel investors who has “been there, done that.” David continued, “The calibre of the pitches tonight is right up there with those I’ve seen in New York and across the world.”

In a first for Halo, the NI Hospice also pitched and gained significant support for their current rebuild project.

Alan Watts, Director of Halo Northern Ireland, said, “David has often been called a ‘super angel’ because of his vigorous involvement in high-growth, early-stage technology companies.

“As founder of GUST, which is a platform which connects startups with investors across the world, David is undoubtedly an authority when it comes to early stage finance and had some very stirring advice for our local angel network.

“Many of our 150 angels here tonight have invested in numerous companies, but there are many more who have backed one or two, and it’s very encouraging for them to hear how a series of carefully chosen angel investments can snowball into a thriving enterprise all of its own.”