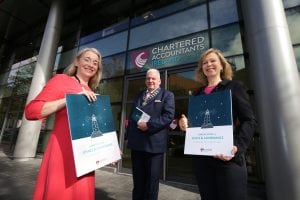 Leading accountancy body, Chartered Accountants Ireland has launched a new Concise Guide of Ethics and Governance for the Charity and Not-for-Profit Sector at its annual ‘Good Governance’ conference in Belfast.

The conference was attended by over 70 people working in and for the charity and not-for-profit sector including regulators, advisors, directors and leading charity representatives.

The Institute’s free guide, the first of its kind in Northern Ireland, received support from the Irish Charities Regulator and the Charity Commission for Northern Ireland, and will be an essential primer for anyone currently a trustee or aspiring to hold such a position in the future.

Welcoming the launch of the Ethics Guide at today’s conference, Institute President Feargal McCormack said: “Charities and not-for-profit organisations have a profound social and economic impact on the fabric of our lives in Ireland. For example, in relation to charities alone, according to 2018 statistics from the Irish Charity Regulator, registered Irish charities have an income of €14.5 billion, directly employ 189,000 people and are supported by 300,000 volunteers.

“In relation to not-for-profit organisations we only have to look to our own local communities to identify the sporting organisations, the drama societies and the many other organisations that serve to provide an important outlet or promote a cultural activity to society.

“Chartered Accountants Ireland is proud of today’s publication and considers it an important resource upon which trustees, leaders and financial custodians can reference as an everyday tool.

Níall Fitzgerald, Head of Ethics and Governance, Chartered Accountants Ireland said: “In order to run effectively and ethically, charities and not-for-profit organisations need the right people to step-up and become volunteer board members. It is vital for the sector that its trustees are as diverse as the organisations they manage. This involves the recruitment of trustees of all age groups, genders and backgrounds getting involved in order to refresh the membership of committees and boards of trustees.

The Concise Guide of Ethics and Governance for the Charity and Not-For-Profit Sector is available to download at the Chartered Accountants Ireland website: https://bit.ly/2NIHD4c