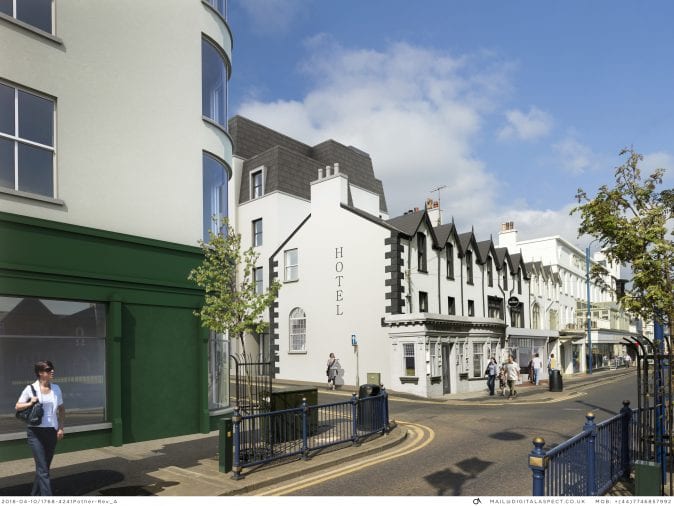 Plans for a new, 87-bedroom, £6.6million hotel which is set to positively transform the economy and job prospects of seaside town, Portrush, have been backed by six leading business organisations and local businesses.

The Federation of Small Business (FSB), Hospitality Ulster, Northern Ireland Hotels Federation, Retail NI, Ulster Stores Limited and the Causeway Chamber of Commerce, have lent their unanimous support to the development and have each made written appeals in a bid to encourage Councillors to decide to allow the development to pass the planning stage.

The plans for the hotel on the site of the former Londonderry Hotel in Portrush have been submitted by Andras Hotels who, following feedback from the local community and since the building was listed to B1 standard, have dramatically revised the proposals to ensure that the hotel will reflect and contribute to the vibrancy of the town. They are being considered by Causeway Coast and Glens Planning Committee on Wednesday 23 January.

If approved, the project will regenerate the area and will contribute an estimated £1.4million each year to the local economy, which will create 48 jobs during the construction phase, adding a further £4.8million to the Causeway Coast and Glens area and an additional 41 new jobs when the hotel opens. The project will attract a further 6,600 visitors to the North Coast per annum.

Rajesh Rana, Director, Andras Hotels hopes that the local Councillors will make their decision based on the long-term economic benefits the new proposed development will bring, he explains: “We have worked extremely hard to develop the plans to allow the refurbishment and restoration of two important listed buildings on Main Street – the Londonderry Hotel and the former Northern Bank across the road. These two projects will dramatically improve the economy of this wonderful seaside town.

“We are committed to retaining the history of the site and important architectural features which will be preserved along with artefacts, pictures and stories.

“The hotel concept will reflect the heritage of this important site and will retain and preserve the historic features.

“The two beautiful mosaics featuring the previous names of Black & Sons and the Londonderry Hotel will be kept and refurbished, and the interior design scheme will retain the Atlantic Bar entrance screen.

“World-class interior designers have been appointed who have prepared fantastic proposals for the reuse of the buildings facing Main Street and to celebrate the heritage of the town in the most unique and celebratory way.

“The interiors will reflect the history of these buildings as well as the unique transition of the Portrush setting, from Victorian seaside resort, to the coastal heritage and global golf appeal.

“If approved, we intend to start work on the hotel in 2019 and open our doors to visitors by the start of 2021.

“We have examined alternative options, but a viability assessment was carried out on the existing building which found that it cannot be brought into economic use if fully retained. A reduced scale option has also been rigorously tested which shows that this would not be viable, nor would it deliver the tourism benefits to the town.

Rajesh concluded: “We hope councillors will recognise the tourism benefit and economic investment we are seeking to deliver for the town and wider area and approve the application.”

The application has been recommended for refusal in part due to concerns raised by Historical Environment Division. The plans submitted will see the important front terraces retained, refurbished and enhanced while the rear parts of the site will be redeveloped to provide new build construction which will host the majority of the bedrooms and public areas on ground floor.

Glyn Roberts, Chief Executive of Retail NI said: “As the representative of the body for independent retails we are fully aware of the need for this type of high quality, well designed hotel accommodation in Portrush town centre. The independent trade sector has already witnessed the benefits of other Andras Hotel schemes – they are a tried and tested hospitality development company with a strong track record. Their willingness to make a significant investment in Portrush should be welcomed and encouraged.”

Janice Gault, Chief Executive of the NI Hotels Federation said: “The Federation is keen to see Northern Ireland developed as a tourism destination offering world class experiences and contributing significantly to the local economy. This project will contribute as estimated £6.6m investment to the local economy which in turn will increase visitor numbers and spend by an estimated £1.4m gross value each year. It will also augment existing provision and help increase appeal of the area. Its location in the centre of Portrush will also see the proposed hotel form an integral part of the regeneration of the town.”

Roger Pollen, Federation of Small Business said: “We wish to register our support for this proposed development and encourage Causeway Coat and Glens Borough Council to response affirmatively to the application. The development of a sensitively designed building will support the positive change underway in this area, Developments of this sort are important not only because of their primary economic role but also because of the very positive associated impact they have of supply chains and on the wider economy.”

Colin Neill, Chief Executive of Hospitality Ulster said: “This development is without doubt a very welcome and much needed addition to the accommodation and visitor offering along the Causeway coast. The proposed scheme, which has been amended to ensure the sympathetic relationship to the listed building status of part of the site, provides an opportunity for Portrush to capitalise on the increased demand for accommodation. I therefor give this project our full support and would encourage a prompt and positive response to the planning application.”

Anthony Newman, President of Causeway Chamber of Commerce said: “As the voice of businesses in the area we are well aware of the need for this type of high-quality, well designed hotel accommodation in Portrush town centre. We have reviewed the revised plans and believe that and believe that these new proposals will provide much-needed accommodation and hospitality amenities whilst retaining and celebrating the history of Portrush. We believe the high-quality design proposed for the site will help regenerate the town centre by turning this site into a vibrant part of Portrush. The site is a central and accessible location perfect for hospitality-focused development. Its delivery will generate new business and support those already in the area.”

Neville Moore, Managing Director of the Whitehouse Portrush has lent his support commenting: “I am delighted to support the revised proposals for the redevelopment of the Londonderry Hotel which has retained the important Main Street frontage. The proposal is strategically important for Portrush and should not just be considered on its own merits as it will also significantly enhance the economic activity of the wider town centre area. The site has been semi-derelict for many years and the opportunity to see it returned to use as an 87-bedroom boutique hotel of this quality is very exciting.”

Andras Hotels was founded in Belfast in 1981 and since then has helped to shape and drive the tourism and hospitality landscape of Belfast. It currently operates five internationally-branded hotels with 1,000 beds in in Belfast; Holiday Inn® Express, Holiday Inn®, Belfast City Centre, two Ibis Hotels, the Crowne Plaza and Hampton by Hilton Hotel.

The revised plans for the new proposed hotel are being considered by Causeway Coast and Glens Planning Committee on Wednesday 23 January 2019.