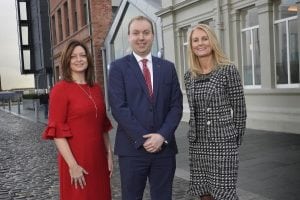 A survey of business leaders taken in Belfast has found that a majority (53%) believe that the best possible outcome in trade talks between the UK and EU would be for Northern Ireland to remain within the Single Market and the Customs Union.

28% favoured ‘Special Status’ for Northern Ireland, while 19% favoured the UK and EU negotiating a free trade agreement. No respondents favoured the ‘No deal’ option of UK and EU trading under World Trade Organisation (WTO) rules.

The survey of 130 business leaders took place at the ‘Brexit – What Next for Northern Ireland?‘  Conference organised by Chartered Accountants Ulster Society in partnership with Danske Bank at the Titanic Hotel, Belfast.

The Conference examined the potential impact of Brexit and the latest thinking from local corporate leaders and business bodies on what leaving the EU might mean for local businesses and how best they can prepare for what’s next.

The biggest threat to Northern Ireland was considered to be EU trade suffering as a result of tariffs and new non-tariff barriers (56%). Customs controls and delays on the border with Republic of Ireland (28%) was also highly ranked by business leaders.

When asked about preparedness for Brexit, less than a third (30%) of business leaders said that they had identified potential risks and opportunities and had started preparing for Brexit. 33% of delegates said that they had appointed a person within their company to address Brexit issues.

“Our geographic, social and economic ties with the Republic of Ireland mean that Northern Ireland may well experience the greatest impact of this decision. Whether you are for or against Brexit, we have seen that the period of uncertainty that we’re going through is crippling for local business. It’s vital that our business leaders and political leaders work together to find a way through instability.

The survey shows that Brexit is a key concern for our members. The business community will get on with things and continue to do business but it is vital that our politicians, our public sector decision makers and our private sector leaders start working together to address the issues.”

Conor Lambe, Economist with event partners Danske Bank and a key speaker at the Conference said: “The vote to leave the European Union in June 2016 has resulted in businesses throughout the UK facing unprecedented levels of uncertainty.

“For companies that export to Europe, or plan to in the future, there is a lack of clarity around what access they will have to EU markets come the end of March 2019 and what that might mean for their international sales. A number of businesses could face issues in their supply chains and many companies are also seeking more details around the UK’s future migration policy given their reliance on workers from EU member states.

“Despite the political and economic uncertainty they have faced in the past, businesses in Northern Ireland have continued to succeed. Therefore I am confident that local companies will find ways to respond to the inevitable long-term changes to the commercial environment that Brexit will result in.

“There are undoubtedly challenges on the horizon. But at Danske Bank, we remain committed to supporting our customers through the uncertainty and, alongside them, we await with great anticipation more details around what the future relationship between the UK and the EU will look like.”

Key findings in the Brexit survey include: