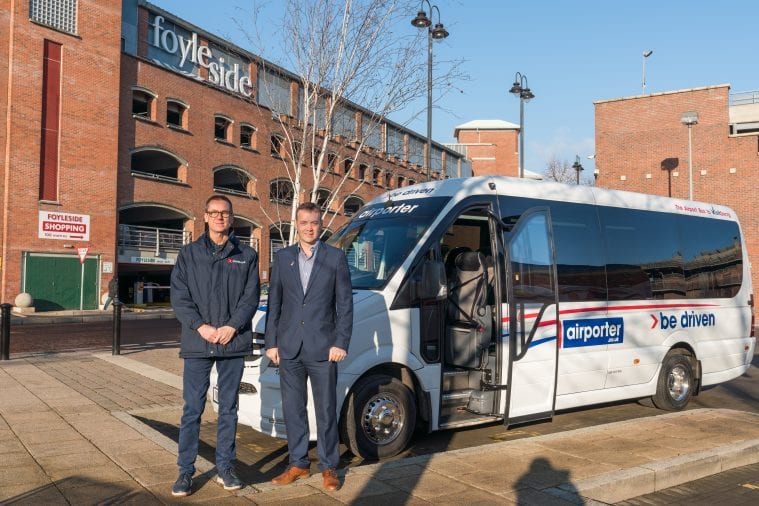 North West transport firm Airporter has announced that it will be moving its customer drop off/pick up point to the city centre to deal with a substantial increase in demand.

The firm, which provides a vital transport link between the North West city region and the two Belfast airports, will begin operating from a new bus stop at the Foyleside Coach park, beside the shopping centre, from 7 January 2019.

The announcement of the new bus stop comes just weeks after the unveiling of a £1million investment in a new 14,000 square foot hub on a 2.5 acre site at the site of the old Lough Swilly bus company, in the Springtown Industrial Estate.

The company made the decision to move its pick up and drop off points as part of its wider strategic move to deal with a steep rise in demand for services.

Founded in 1996, the company has seen passenger numbers increase from around 5,000 in its first year to approximately 155,000 last year. It has a fleet of 21 vehicles and operates 30 journeys every day.

The company has evolved from one that transports holiday-makers to one which ferries thousands of people every year who commute to the UK and beyond for work and study.

It has become a crucial part of the infrastructure linking the North West city region to the rest of the world.

Niall McKeever, Director of Airporter said: “We’ve seen a significant increase in the number of people using our service and this move is a direct reaction to that. We want to ensure there is a seamless connection between the North West city region and the UK and Europe.

“The reason more people than ever are visiting the North West City region, including Derry/Londonderry, is because it’s an attractive place for both tourists and investors. The reason those people are choosing to travel with us, is because we provide a reliable and efficient service.

“Airporter connects the North West with the rest of the world and we know that people are more likely to come here if there’s a fast, cost effective and efficient service to get them here. We know that we haven’t built that reputation on standing still and the fact that we have 150,000 more customers this year than we did in the year we started is because we have made investments and changes to maintain the quality of our service and make it work for our customers first and foremost.

“Tourism is an incredibly important part of the Northern Irish economy. Tourists provide a vital boost to the local economy and recent work that has started on the A6 will only make it easier for people to travel to and from the North West. We expect that more and more people will use our service as the travel time will reduce even further once those road works are complete.

“The investments that we have made as a company over the last twenty years have shown our commitment and dedication to the North West City region. There is a lot of energy, passion and talent in this region and what we need now is a functioning Executive that can take long term strategic decisions on the best way to invest in infrastructure and promote economic growth.”

Fergal Rafferty, Foyleside Centre Manager added: “It’s great news for Airporter’s thousands of passengers that they have chosen Foyleside as the location for their new customer contact point.

“The central location and ease of access to other means of onward travel will undoubtedly prove popular, as will the discounted parking rates they can enjoy in our Eastside Carpark.

“This partnership between Foyleside and Airporter now means that those travelling to see this part of the world for the first time will find a warm welcome right in the heart of the city.”