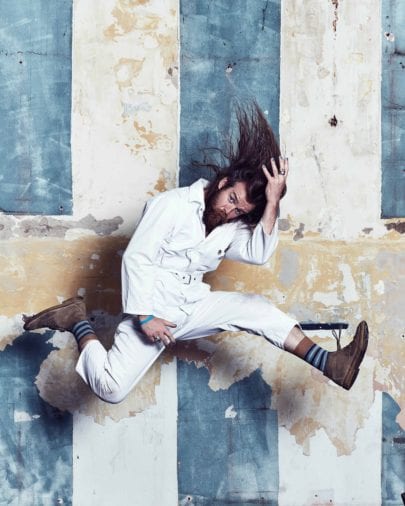 Belfast comedian Paul Currie will be throwing out ‘truth bombs’ around at this year’s Edinburgh Fringe Festival, laced with liberal amounts of clowning around and humour.

Making his eighth appearance at the prestigious festival Paul will be performing throughout August with his all-ages ‘Release The Baboons’ show and, the definitely adults only ‘Trufficle Musk’ performance.

It’s an immersive show, with a lot of interaction with the audience, but it deals with subject matters that will shock, move the audience, and shake them up a bit.

“I try to do the controversial topics in a really silly, stupid way, where I’m still seen as the clown, the jester,” said Paul.

“You’re throwing back social truths to people, about religion being a construct, or gender being a construct. These utter truths that we refuse to kind of accept because we cling onto these beliefs, to sort of get through life.

“But as a jester, as a clown, if you can kind of distil these truths to people, in a sort of, with a lot of sugar, you know, in a little pinch. Just drop these little truth bombs.”

And to be clear about what audiences can expect the official Fringe website warns that Paul’s show features: “Audience participation, contains distressing themes, nudity, strong language/swearing”.

While he aims to confront societal issues he is definitely not po-faced about it.

“I hope the audience will sort of laugh it off, but also, hopefully it’ll stick with a few people in their heads. You know, and at least make them think a little bit.

“I’m not trying to, like, completely convert people or change people into atheism or anything. But it’s the fact that, if you just look around, the whole planet, we’re all still developing. Humanity is still in the creche.”

And, he has come to believe that when he performs his all-ages show he has to be careful; not that he will care children with his puppets, but that the adults will influence their children.

“I’ll tell you from my own experience of performing for kids, it’s also the adults that scare the kids,” he said. “The kids aren’t afraid. but the adults immediately say, oh my God, that’s scary. Or oh my God, stay away from my kid.

“The children are looking at the parents being freaked out. And then the parents are telling the kids that they’re scared, when they’re not.

“I do a couple of puppets, walkabout puppets such as a little tinker puppet with a backpack on.

“I’ve done it so many times, where you walk up to the kids, and the kids are a bit like, what’s that? But the parents then go, oh my God. And pull the kid away. And the kid then goes, yeah that is scary. Whereas, if they don’t do that, I’ve had little tiny kids coming up and stroking his face and being just absolutely fascinated by it.”

These, amongst other ‘truth bombs’ will be featured in his performances throughout August.

To book Trufficle Musk or Release The Baboons go to edfringe.com or check out Paul Currie on Facebook and Instagram.  #PaulCurrieLive