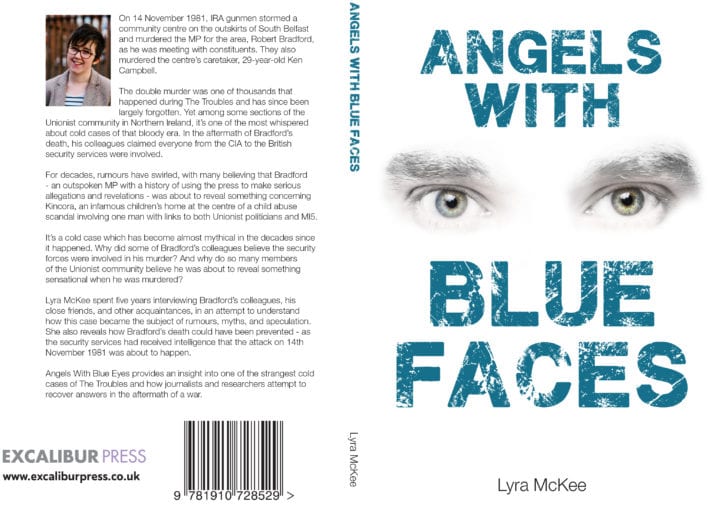 The book was completed shortly before Lyra died from a single gunshot fired by a dissident republican gunman in Derry on April 18th this year.

Lyra spend six years methodically researching the murder of UUP MP, Robert Bradford in November in 1981, uncovering many aspects of the case that had never before come to light.

Bradford’s death, and that of 29-year-old Ken Campbell has been the subject of speculation and conspiracy theories surrounding allegations that the MP was about to expose sordid details about who was involved in the Kincora.

Lyra interviewed Bradford’s friends, colleagues, and acquaintances as well as a number of other sources – and reveals how the MP’s killing might have been prevented by intelligence services.

Trawling through public records and documents she had procured during her search for the truth, Lyra spent most of her journalistic career in the pursuit of answers.  In many cases, she came up against more questions.

In the book Lyra writes: “I began researching Angels with Blue Faces when I was 22 years old. It arose out of another story entirely, when I was blogging, filing Freedom of Information Act requests, and asking questions about a decades-old scandal involving a children’s home. At the time, I’d just begun working as an editor for a news site covering the media industry, based out of Silicon Valley, but I wanted to flex my muscles and prove to myself – and others – that I could report too. I’d spent years gaining experience through internships and then freelancing my way through university. Journalism could feel like a dying industry at times and – certainly at the regional level of Northern Ireland – there were few opportunities to do big, blockbuster stories in print. Meanwhile, though, in the United States, literary nonfiction of the New Yorker variety was seeing a renaissance, with sites and communities like Longform and #longreads popping up.

“Inspired by this movement and writers like Michael Hastings – an American war correspondent who sadly died on his own home soil in a horrific car crash, aged 33 – I wanted to do something similar, something I hadn’t seen done in Northern Ireland before, and write a nonfiction story that read like a novel.

“This was an ambitious undertaking for a young, still ‘wet behind the ears’ journalist. I’d known people who’d been in the IRA but only to see in the local area, as they went about their non-paramilitary related business. Growing up in the Catholic community in Northern Ireland – who had a historically uneasy relationship with the local police, for a variety of reasons – meant I didn’t know any cops or people who’d worked in the security services.

“I developed the contacts I needed, from police to ex-prisoners, often thanks to kind, veteran journalists who took pity on me and made introductions to people they’d known. The BBC’s Chris Moore, Belfast Telegraph columnist Ruth Dudley Edwards, and Anthony and Carrie McIntyre did this frequently. Some of said contacts found me or vice versa.

It’s taken a long time to get Angels With Blue Faces into print.

Lyra’s writing is almost poetic, as seen in her description of her homeland, “Northern Ireland is a beautiful tragedy, strangled by the chains of its past and its present. It’s a place full of darkness and mysteries. It’s also my home. Sometimes, I love it and hate it in equal measure. Yet, despite being a tiny country, we disproportionately contribute talent to the rest of the world.”

“Lyra put years into this project,” she said. “It is so sad that she never got to hold the final copy of Angels With Blue Faces in her hand.

“I am just so proud of you now as I was of you every day or your life”.

Speaking in her foreword in the book Nichola added:  “Although my sister had little else in common with anyone in this story, she was passionate about exposing the truth – or at least as much of it that she could discover. She hoped that perhaps someone, somewhere – hopefully with some sort of power – would have to sit up, listen and do something upon reading the puzzle she was painstakingly piecing together so that their families could get real answers and in the hope that it would never happen again.

“Within this volume, you will read Lyra share her concerns about the personal safety of ‘young writers asking too many questions’. Although Lyra claims she was ‘being paranoid’ at the time of writing, it won’t fail to raise eyebrows. You will also read how both Bradford and Campbell died from the very same injury as our beloved Lyra; it is truly surreal to read these connections.

“Our family are immensely proud of Lyra’s achievements.  May you all get a better sense of our Lyra through reading her words within this publication. May you all discover that Lyra never sought fame or fortune, all she desired was the truth and to make a career out of what she was most passionate about: investigative journalism.”

In January 2018 Lyra struck a deal with indie publishers Excalibur Press to finally put her work into print. She then set about researching the book further and spent time editing and re-editing to her final draft.

“Just a short time before her death Lyra had approved her cover and sent the final changes for her book, she should have been holding it in her hand at the end of April.

“Lyra’s investigation into the death of Northern Ireland MP Robert Bradford was a passion project for her, for years it became her obsession as she followed lead after lead in the pursuit of the truth.

“We were absolutely delighted when Lyra agreed to entrust Excalibur Press with this book and were devastated to learn of her death just days before the book should have been going on pre-release and less than a month before she would have held it in her hand.

“Excalibur Press will be donating our commission to our not-for-profit entity The Merlin Project where we hope to run a series of events, workshops and potentially courses for young reporters wanting to learn some of the practical aspects of the industry.

“Taking inspiration from Lyra and her talent, we hope to teach young journalists the art of research as well as interview techniques and more.”