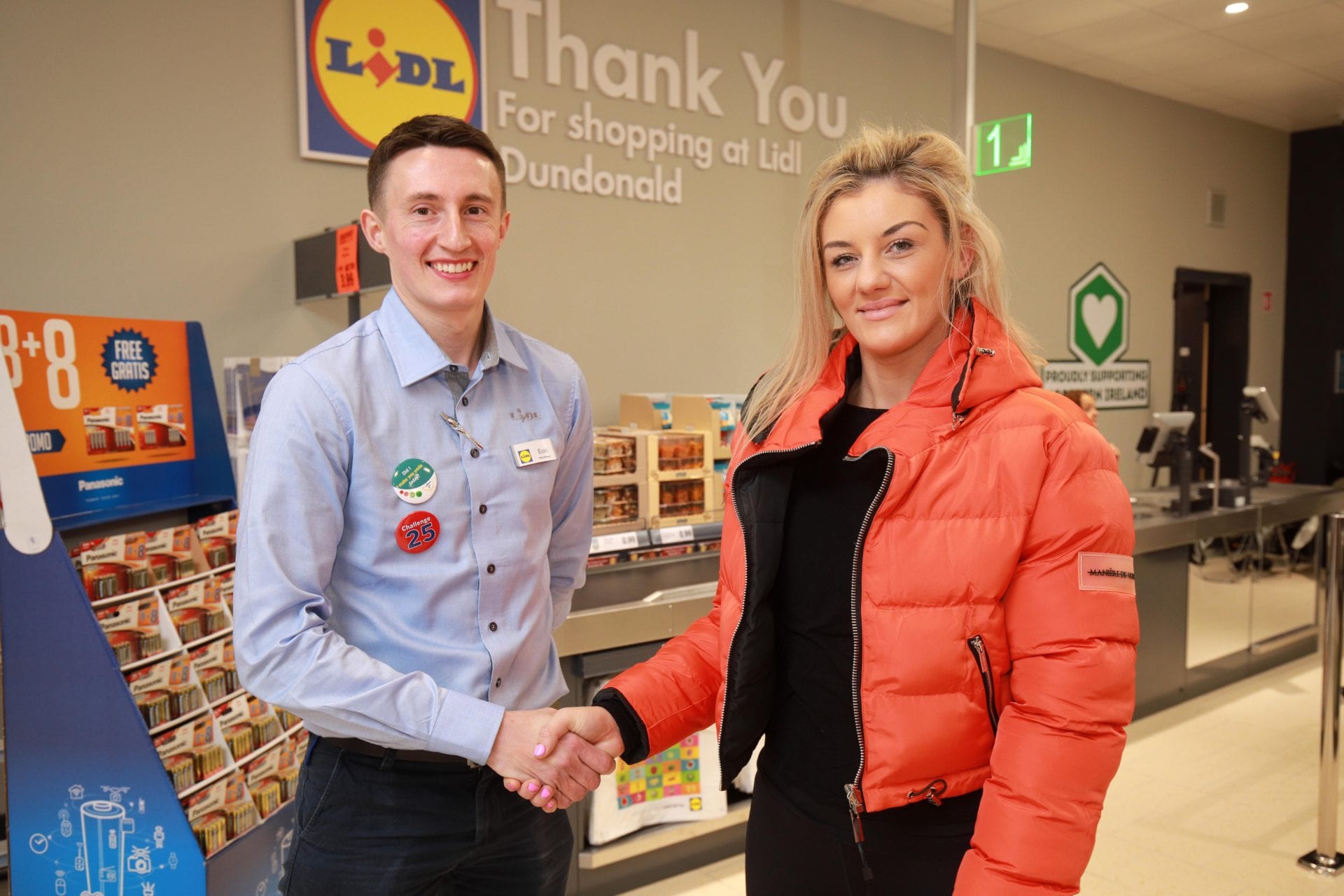 Lidl Northern Ireland today opened the doors of its brand new store in Dundonald, creating 16 new jobs, and marking its 39th store in the region.

The freshly refurbished store was officially opened by Lidl Sport for Good ambassador and MMA gold medalist and jiu jitsu champion, Leah McCourt, who cut the ribbon and welcomed hundreds of customers to the new store.

The Dundonald store incorporates a total sales floor of almost 1,300 square metres inside a 1,550 square metre building which has been transformed to include additional parking, higher ceilings, a more spacious interior layout, an enlarged bakery area and a Lidl To Go coffee machine.

The new store format, which is part of a wider plan to dramatically enhance its service provision across Northern Ireland, forms part of a multi-million-pound investment programme to expand its presence in the region.

Located adjacent to Translink’s Glider hub at 2, Dunlady Road in Dundonald, the store uniquely benefits from immediate access to Glider’s cross-city service at Dundonald Park and Ride, offering customers from across the city a reliable, relaxing and affordable transport option for visiting the new store.

Eoin Doherty, Dundonald Store Manager said: “We’re delighted to open the doors of our new store this morning just in time for the festive season and provide local customers with greater choice and a dramatically enhanced shopping experience. As Lidl is committed to delivering high quality, locally-produced products at market-leading prices, we’re thrilled to bring this winning formula to Dundonald and the wider area.

We would like to thank our colleagues for their hard work and commitment in the run up to today and a special thanks to our loyal customers who were patient while we worked on the new build.”

To celebrate the new store opening, Lidl is hosting a number of family-friendly festive events at the Dundonald store, including a family drive-in cinema screening of Elf on Sunday 1 December and Santa’s Grotto appearing in-store from Thursday 5 December.

Lidl also welcomed teachers and pupils from local schools, Dundonald Primary School and Longstone Special School, to the new store who each received a £500 bursary as part of the retailer’s commitment to positively contributing to its local community.

Earlier this year, Lidl Northern Ireland confirmed plans for a new supermarket at Holywood Exchange and at Newry’s Buttercrane Shopping Centre, while plans for new stores in Newtownards, Newcastle, Castlereagh and at Bow Street Mall in Portadown are also progressing. Lidl also recently opened a new store at The Junction retail complex in Antrim.

In September, Lidl Northern Ireland revealed that it contributes around £180 million a year to the local economy, sustaining 3,500 jobs while buying and exporting as much as £290 million worth of local goods and products. Marking its 20th anniversary this year, the company commissioned Oxford Economics to directly examine its growing impact and capture its value to the local economy.

To support its expansion and new store programme, Lidl Northern Ireland has also invested around £8 million every year since 2008 – last year, that figure was almost £13 million.