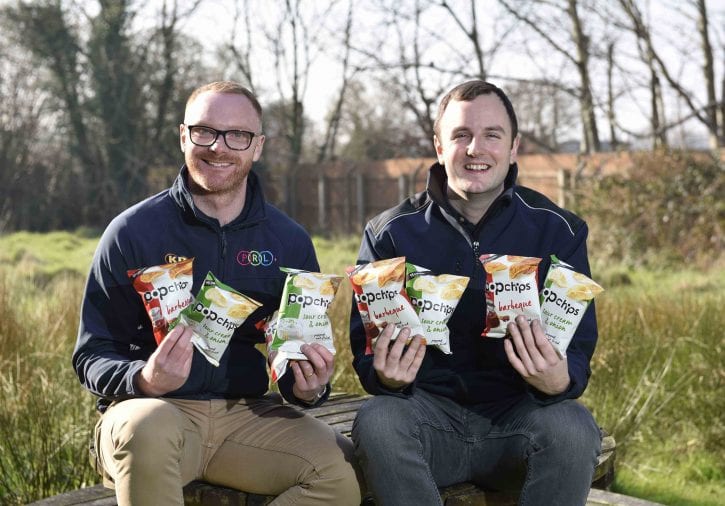 Snack lovers looking for a tasty low calorie snack will be interested to hear that crisp and snack manufacturer KP Snacks Ltd has added to its ‘under 100 calorie’ range with the launch of new Popchips in Northern Ireland.

The new snack, which is ‘popped’ instead of deep fried like most potato crisps, weighs in at a very tasty 97 calories per pack and comes in three delicious flavours – Barbecue, Sour Cream and Onion and Sea Salt and Vinegar.

“We are delighted to launch our tasty new ‘low cal’ snack Popchips in Northern Ireland,” said Ricky, “and are confident that it will be a huge hit with consumers who want a snack that is low in calories but bursting with flavour.

“Health is increasingly an important factor when it comes to people’s snacking choices, so much so that the ‘healthier snack’ market is estimated at more than £17m in the UK with 30 per cent growth in the last two years.

“At KP Snacks we have seen tremendous growth in our ‘Better For You’ range, to the extent that we now offer no fewer than 37 products in our ‘under 100 calories’ portfolio,” he added.  “We are thrilled to add Popchips to this range, which also includes Hula Hoops Puft, the lowest calorie bagged snack in the UK marketplace at just 71 calories per pack.

“The popularity of these products goes to show that being ‘Better For You’ doesn’t mean boring and tasteless – and that is certainly the case with Popchips,” concluded Ricky.

Earn yourself a bag of Popchips

At just 97 calories per pack, it doesn’t take much to ‘burn off’ a bag of Popchips.  In fact, KP have even provided a few ideas on how to do just that…

As part of its ‘Taste for Good’ commitment, KP Snacks has been working on improving the health credentials of its products for a number of years, reducing saturated fat by 80% across its core brands.

In the local convenience sector (which excludes large supermarket chains and discounter stores), the company experienced growth of 5.5 per cent* during 2018 and now boasts a 21.1%* value share of the Northern Ireland Crisps, Snacks and Nuts (CSN) Convenience Market.

New Popchips will be available at convenience and independent stores throughout Northern Ireland.