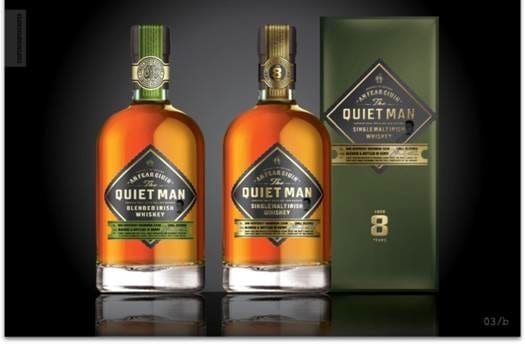 Niche Drinks in Northern Ireland has won gold and silver for its Quiet Man single malts at the Irish Whiskey Masters, an international competition and part of the Whisky Masters, writes Sam Butler.

The Quiet Man range of single malt and blended whiskeys was developed by Niche Drinks a longstanding specialist in cream liqueurs. The company is owned by Luxco, Inc of St Louis Missouri which distributes the whiskeys worldwide.

The Quiet Man, launched in 2014 by Ciaran Mulgrew, managing director of Niche Drinks, is among the most successful exporters of local whiskey, a dynamic category particularly in the US. Whiskey is now the leading brown spirit worldwide.

Global sales of Irish whiskey have soared by more than 300 percent in the past decade, according to the Department for International Trade.

Distilleries in Northern Ireland were singled out as being an important factor in boosting the category’s growth earlier this year, which the Irish Whiskey Association forecasts will hit 12 million nine‐litre cases by 2020.

The Quiet Man was the first Irish Whiskey produced in Derry in more than a century. Derry was once the home of Ireland’s largest and most successful whiskey distillery.

The Quiet Man brand was chosen by Mr Mulgrew in honour of his father who worked in bars around Belfast for 50 years and was known for his discretion and earned the nickname ‘The Quiet Man’.

Niche Drinks was formed in 2006 in a management buy-out of the established Saint Brendan’s Irish Cream Liqueur business. The Saint Brendan’s brand is now owned by Luxco and produced by Niche Drinks for the US company. Plans to build a new whiskey distillery at Ebrington in Derry were cancelled last year by Luxco.