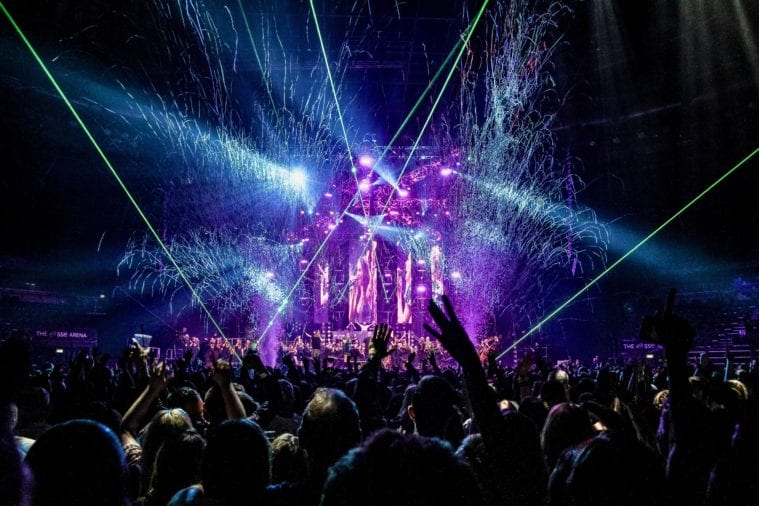 Saturday 10 August, Kellys Portrush/Lush! will host a 12,000 capacity Live at the Beach Portrush in partnership with the Ulster Orchestra and world-class DJs. Tickets have been selling like hot cakes for the hugely anticipated event which follows the overwhelming success of the sell-out Lush! Classical shows at the SSE Arena Belfast and Ebrington Square, Derry/Londonderry for the Clipper Yacht Race celebrations.

This event takes the show to the next level with their biggest classical show to-date…taking the ‘Lush Classical’ concept outdoors with the North Coast’s stunning coastline as its backdrop.

Lush! Classical Live at the Beach will be staged at Portrush’s famous East Strand and will see a 55-piece Ulster Orchestra, produced by Kylie Minogue’s musical director Steve Anderson combined with the genius of DJ and musical producer, Dave Seaman and featuring ‘Ibiza’s favourite saxophone player’ Lovely Laura and Maria Nayler. The event has capacity for 12,000 music fans -making it the biggest ever outdoor Classical dance event in Northern Ireland estimated at contributing more than £1.8million to the local economy.

Live at the Beach Portrush

The event is part of a three-day music festival event in partnership with LSFX Productions.

For generations of music-fans in Northern Ireland, Kellys in Portrush has always been synonymous with the biggest stars of the local and international dance scene filling the floors every weekend for the most enthusiastic revelers.

The newly revamped Kellys venue is also renowned for innovation and pushing the boundaries of genre, while pioneering new forms of dance music.

Peter Wilson, owner, Kellys Portrush said: “This is our golden year for Kellys as we celebrate our 50th anniversary, so we really wanted to pull out all the stops and give our loyal fans the party of their life,” Peter said.

“We have already had an unbelievable summer with the success of The Open and next weekend is the icing on the cake.

“This event will build on the success of our previous classical meets dance events, which actually started as a one-off three years ago to mark Lush’s 20th anniversary.

“Such was the success of Lush! Classical events held in previous years at SSE Arena in Belfast, that we wanted to bring it all back home and recreate an Ibiza-style beach party on the North Coast to celebrate a landmark year for Kellys.

“Demand for an even bigger and better event has been such, that we decided to use the fantastic coastal venue on our doorstep to host a party worthy of Kellys’ five decades as the North’s premier entertainment hub.”

Given the nature of the dance/classical mash-up, these events attract people from 18 to 60 as many of the greatest dance tunes of all time are reinterpreted for the 21st century by superstar DJs, supported by the 55-strong Ulster Orchestra.

To date, Lush! has entertained over one million partygoers, with people travelling from all over the north and beyond every week to enjoy fresh and classic beats, with many top DJ’s citing the atmosphere in the club as the best in the world.

“This is event going to be huge,” Peter says. “We took a chance in 2016 with what admittedly sounds like a bit of crazy idea as the Ulster Orchestra backing some of the world’s biggest house music DJs didn’t sound like it would work.

“The last three years have seen us stake our reputation and invest a lot of capital into something that had never been done in Northern Ireland before.

“Lush! Classical was born out of an idea presented to me by Col Hamilton, our co-founder and resident DJ of Lush. He had seen the fantastic success of the Ibiza Proms and had the idea to run an even better version using our own Ulster Orchestra in the SSE Arena.

“Col has been with us since Lush! started back in 1996 and I am glad I trusted his judgement as fans have loved it and fully supported every ‘classical meets dance’ event we have organised over the last three years.

Col Hamilton continued: “We are so excited to be on the final countdown for this event which we have been planning for many months.

“There are a limited number of tickets left so I recommend anyone still hoping to go to go onto Ticketmaster now and purchase them asap.

“Following on from the huge success of The Open this is going to be THE legendary party on the North Coast this summer,” he added.

“The first year we ran the Lush! Classical in 2016 we sold out the 5,000 capacity of the arena, and the following years we doubled the numbers with over 10,000 revellers gathered in the SSE Arena. That proves we are doing something right.

“This year is going to be even bigger and better, and I am delighted that we are bringing jobs and investment into my home town. I cant wait to share the night with the people of Portrush and the North Coast.”

Tickets cost £35 and £50 (plus booking fees) for the VIP area (hosted by Ibiza’s Café Mambo) and can be purchased from the usual outlets.

For more information go to www.liveatthebeach.co.uk. Note, this event is strictly over 18’s only.