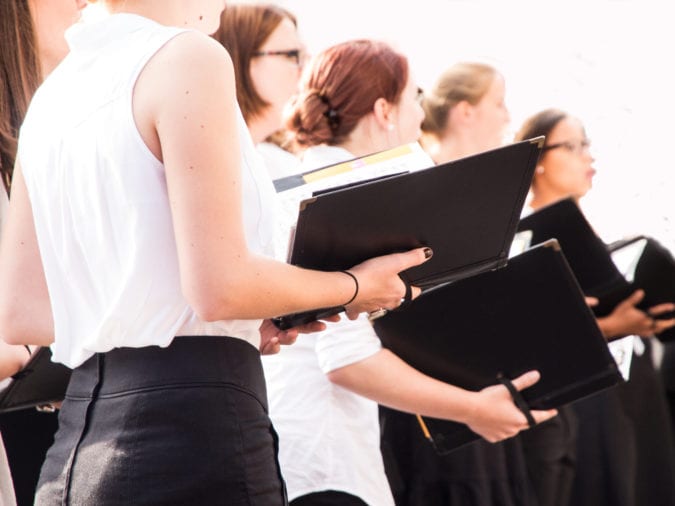 Backed by Cathedral Quarter Business Improvement District and Belfast Music in collaboration with Shade Music this is a unique opportunity to get involved in what is set to be a musical extravaganza.

Gareth Neill, Cathedral Quarter BID Manager, said this was an outstanding chance to become involved in a choral spectacular that culminates with a performance at Rosemary Street 1st Presbyterian Church.

“The new choir has been put together as part of the city’s Summer Music Programme under well know local music producer Katie Richardson,” he said.

“It’s open to anybody who works, lives or visits the area and is proving popular as already around 40-50 people have registered.

“It’s a great way for many of them to unwind away from the pressures of work and is also proving an excellent way for people to socialise together over lunch and after work while doing something positive and contributing to the cultural fabric of Cathedral Quarter.”

Songs have been specially arranged contemporary music including songs by Northern Irish artists and will work towards performances in CQ and beyond.

The focus is on having fun, pushing out of our comfort zones and building community and confidence through music and singing.

Five of Northern Ireland’s most exciting original artists, paired them with the Cathedral Quarter choir singing specially arranged versions of their songs and put them in the beautiful setting of Rosemary Street Church and you have CHANT.

This will be a gig to remember featuring the songs and talents of Sam Wickens, Reevah, Hex Hue, Travis is a Tourist and Alice LA.

“Everyone is welcome. This is the start of something special – come and get involved,” said Gareth. “There will be weekly rehearsals as part of a ten-week season (which will each have 12 rehearsals in total) starting on 29th July 2019 and culminating in a beautiful performance with some of our best artists and songwriters on 26th September.”

The rehearsals will take place on Monday evenings and Wednesday lunchtimes as part of a ten week season.

“We will sing specially arranged versions of their songs with them at the gig in First Presbyterian Church Rosemary Street.”

Destination CQ and Belfast Music are subsidising the season but we are asking for a small donation of £3 per rehearsal to cover costs. This means £36 for the full 12 rehearsals.

Gareth said: “If you’re interested but nervous get in touch – we will focus on fun and building confidence through singing as well as making a brilliant sound.”

Cathedral Quarter Choir will be directed by musician, sound designer and facilitator Katie Richardson. Katie has over twenty year’s experience singing with and directing choirs and had worked with some of Irelands and the UKs top directors, musicians and directors both as a performer and composer.